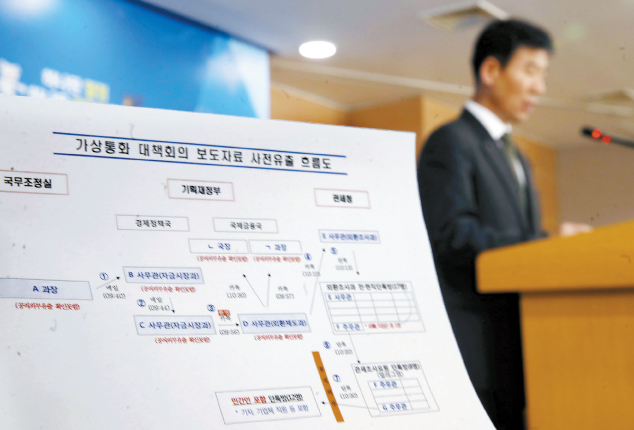 An official from the Office for Government Policy Coordination holds a press briefing Friday at the Gwanghwamun government complex in Seoul, explaining the leak of government regulations on the cryptocurrency market through Kakao Talk, the country’s top messaging app. [YONHAP]

The culprit behind the leak was a customs official who shared the classified documents on Kakao Talk, the top messenger app in Korea, a violation of national cyber security law. The leak prompted a firestorm of criticisms and led the Korea Customs Service to issue a public apology.

The recent incident underscored the growing dangers of the rampant use of Kakao Talk, a commercial app, by government officials for reporting and sharing official documents in violation of the National Cyber Security Management Regulation, a presidential directive.

Under the security management regulation, government officials are banned from distributing official documents via commercial programs. But while the current law defines such an act as illicit, it stops short of providing appropriate level of punishments, leading to the continued use of Kakao Talk by officials.

Such lax security management is in stark contrast with how sternly the U.S. government is dealing with the distribution of official documents. A controversy over former Democratic nominee Hillary Clinton’s use of a private email server for official work when she was leading the State Department led the FBI to launch an investigation that some say cost her the presidential election.

“Government officials’ careless sharing of information through Kakao Talk could potentially impact the commercial market if leaks show how indifferent the government is to the importance of information security,” said Kim Tae-yoon, professor of public administration at Hanyang University.

While using the popular app is against regulations, Min Chul-ki, director of the audit team at the Strategy and Finance Ministry, said there are some “practical reasons” that prompt government workers to use Kakao Talk for work.

“Since face-to-face meetings between officials in Sejong City and Seoul have become a daunting task with the relocation of the government complex to Sejong, there are some practical reasons that induce officials here to use Kakao Talk,” the official said.

Another official at the Industry Ministry, who spoke on the condition of anonymity, said that if the use of Kakao Talk were to be completely banned, “work efficiency would be greatly affected.”

In fact, the government developed an official messenger program for officials, called “Baro Talk,” in 2014. The features it provides fall far short of the convenient features offered by Kakao Talk, many government officials say. For instance, Baro Talk does not allow users to download documents and photos on a smartphone due to security concerns.

As a result of the lack of functions, less than 160,000 officials use the platform, only 38 percent of the intended users.

“A leak from public officials could have more dire consequences since it could gravely affect the private industry,” said Lee Chang-won, professor of public administration at Hansung University. “In the digital era, a word let slip by government officials could be spread worldwide in a second. While we need to upgrade the official Baro Talk platform for better features, the government should take the recent leak as an opportunity to raise information security awareness.”