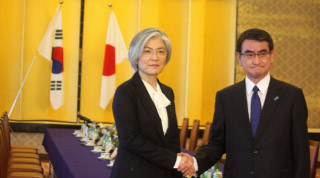 Korean Foreign Minister Kang Kyung-wha, left, shakes hands with Japanese Foreign Minister Taro Kono as they kick off talks Tuesday in Tokyo on bilateral relations and the North Korean nuclear issue. Kang, on her first two-day trip to Tokyo since she took the post, explained that a task force to review the 2015 bilateral agreement on the so-called comfort women issue will announce its results later this week. The two ministers also agreed to strengthen dialogue to develop future relations, and Kang extended an invitation to Japanese Prime Minister Shinzo Abe to visit Korea during the 2018 PyeongChang Winter Olympics. [YONHAP]