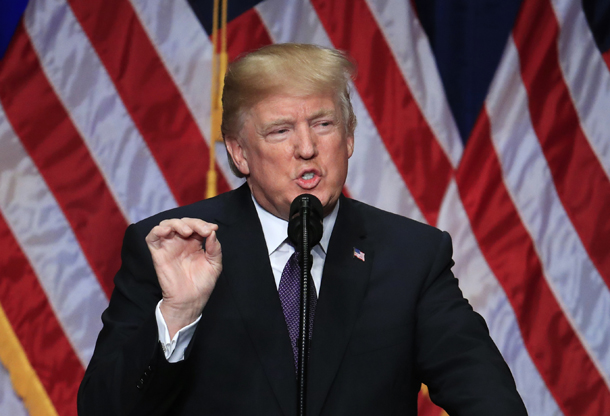 U.S. President Donald Trump vowed to take “all necessary steps” to compel North Korea to denuclearize as he unveiled a new national security strategy on Monday at the White House.

Trump said in an address that the campaign of maximum pressure on North Korea has resulted in the toughest-ever sanctions on the regime, but “there is much more work to do.”

He continued, “America and its allies will take all necessary steps to achieve a denuclearization and ensure that this regime cannot threaten the world.”

The situation, he said “will be taken care of,” adding that the United States has “no choice” in the matter.

“A nation that is not prepared to win a war is a nation not capable of preventing a war,” said Trump, as he called for a modernization and massive buildup of the U.S. military.

Trump said he carried the United States’ message to Saudi Arabia, Poland, the United Nations General Assembly in New York and South Korea, referring to it as “the seat of democracy on the Korean Peninsula,” as he recalled his trips to 13 countries over 11 months in office.

The strategy unveiled by Trump focused on four pillars buttressing his “America first” vision, which included protecting U.S. citizens and the homeland, promoting prosperity, preserving peace through strength and advancing American influence in the world.

A newly released National Security Strategy report described North Korea as a “ruthless dictatorship without regard for human dignity” that “starves its own people,” spending hundreds of millions of dollars on its nuclear, chemical and biological weapons.

“We remain ready to respond with overwhelming force to North Korean aggression and will improve options to compel denuclearization of the peninsula,” the 55-page document stated.

H. R. McMaster, the White House national security adviser, previously raised the possibility of “a preventive war” against North Korea, and in an interview with MSNBC in August said that Trump was “not going to tolerate” Pyongyang being able to threaten the United States.

The report, however, took a more restrained tone in that it did not make mention of a preventive war, or a pre-emptive strike, against the North, nor directly refer to “military options.”

“The longer we ignore threats from countries determined to proliferate and develop weapons of mass destruction, the worse such threats become, and the fewer defensive options we have,” it continued.

A 2002 NSS report by the George W. Bush administration emphasized that the United States maintains an “option of pre-emptive actions to counter a sufficient threat to our national security,” though it was more focused on a war against terrorists than North Korea.

The Trump administration’s labeling of China as a “rival power” is a shift in tone from previous governments, including the Barack Obama administration, which viewed Beijing as a potential cooperative partner in confronting global challenges as it pushed for a rebalancing or “pivot” to the Asia-Pacific region.

The document released Monday said that China “expanded its power at the expense of the sovereignty of others” and that its nuclear arsenal is growing and diversifying. Russia, meanwhile, “aims to weaken U.S. influence in the world” and divide Washington from its allies and partners.

It said the United States is deploying a layered missile defense system, focused on North Korea and Iran, to defend the mainland against missile attacks. This includes the ability to eliminate missile threats before launch. This was not intended to disrupt strategic relations with Russia and China, it added.

Other actions to defend against weapons of mass destruction include bolstered efforts to detect nuclear, chemical, radiological and biological agents, as well as enhance counter-proliferation measures.

A global response is needed to North Korea’s rapid acceleration of its cyber, nuclear and ballistic missile programs, it described, adding continued provocations by the North “will prompt neighboring countries and the United States to further strengthen security bonds and take additional measures to protect themselves.”

Washington will “work with allies and partners to achieve complete, verifiable, and irreversible denuclearization on the Korean Peninsula and preserve the nonproliferation regime in Northeast Asia,” the report declared.

It also warned that “a nuclear-armed North Korea could lead to the proliferation of the world’s most destructive weapons across the Indo-Pacific region and beyond.”

The report went into a more concrete description of Trump’s vision of an Indo-Pacific region than before, which it defined as “stretching from the west coast of India to the western shores of the United States,” representing “the most populous and economically dynamic part of the world.”

During a visit to Asia last month, Trump described “a free and open Indo-Pacific” concept rather than the traditionally used term “Asia-Pacific,” leading to speculation that this was a policy of containing China.

The Trump administration said its strategy aims to ensure that the “balance of power remains in America’s favor in key regions of the world: the Indo-Pacific, Europe, and the Middle East.”

The report said a “geopolitical competition between free and repressive visions of world order is taking place in the Indo-Pacific region,” but claimed that this vision “excludes no nation.”

Washington seeks to continue to cooperate with Beijing. However, the document pointed out that China “is using economic inducements and penalties, influence operations, and implied military threats to persuade other states to heed its political and security agenda.”

It did not directly refer to Beijing’s backlash against the deployment of the U.S.-led Terminal High Altitude Area Defense (Thaad) antimissile system to South Korea and the economic retaliatory measures it took against Seoul.

“Our alliance and friendship with South Korea, forged by the trials of history, is stronger than ever,” it said when listing key allies in the region.

It added, “We will seek to increase quadrilateral cooperation with Japan, Australia, and India.”

The report also mentioned Beijing’s militarization in the South China Sea and added that “Chinese dominance risks diminishing the sovereignty of many states in the Indo-Pacific,” a contentious issue that could lead to more friction in the region and also put Seoul in an awkward position as it tries to maintain a diplomatic balance between Beijing and Washington.

The United States also will “cooperate on missile defense with Japan and South Korea to move toward an area defense capability,” the report added, without elaborating. The Moon Jae-in administration has said it does not seek a trilateral military alliance with the United States and Japan and has no intention to participate in a U.S.-led missile defense regimen, a move to ease China’s security concerns.

South Korean Ambassador to the United States Cho Yoon-je said Tuesday in Seoul, “As the Indo-Pacific strategy becomes more concrete in the United States, we also have the task of planning what sort of strategy we will take on this.”

The strategy also touted Trump’s “concept of principled realism,” which “acknowledges the central role of power in international politics, affirms that strong and sovereign states are the best hope for a peaceful world, and clearly defines our national interests.”