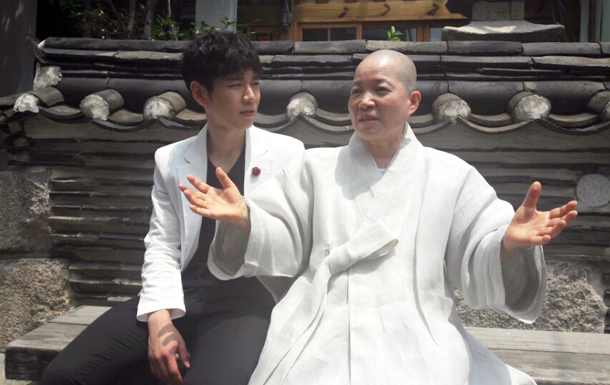 The son of actor Baek Yoon-sik, Baek Seo-bin, left, won the Best Actor Award at the 2017 Sochi International Film Festival and Awards for his role in the movie, “Sermon on the Mount,” which was released on Dec. 7.

The movie’s distributor, Eon Pictures, announced on Wednesday, “The movie was previously invited to Moscow International Film Festival in June, and this time it opened the Sochi festival on Dec. 11, and Baek won the award.”

The movie revolves around eight young Christians throwing sharp questions to God, and the process of exploring the answers to those questions. It is directed by Buddhist monk Daehae, right.

“This is a high-quality movie, and since Baek digested the deep and philosophic topic very well, he was selected as Best Actor,” said one of the judges at the Sochi festival. The festival was held from Dec. 11 to 16.

The actor made his debut in 2011 in the SBS period drama, “Deep Rooted Tree” with actors Jang Hyuk and Shin Se-kyung.