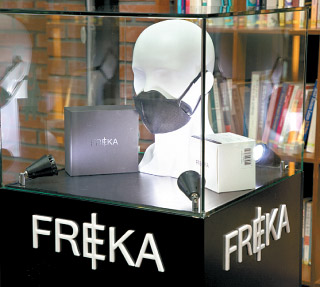 British-Korean anti-pollution mask manufacturer Freka announced Wednesday it would release a model for children during next year’s first quarter.

Established last year, the company specializes in upscale anti-pollution masks that cost 180,000 won ($166) each. Unlike most such masks, which are disposable, Freka’s can be reused by changing filters. They come in many patterns and colors.

After launching in the U.K. in 2016, the company starting sales here in April. During that month, global sales jumped 250 percent and annual sales this year increased 80 percent compared to 2016. In Korea, Freka masks are sold at Galleria and the Lotte and Hyundai Department Store branches.

Freka produces two models - Freka Flow and Freka Facewear - for adults. The products have frames that fit to the jaw and curves of the face. They don’t work well on children.

“In our consumer feedback, the question that came up the most was whether we make models for children,” said Choi Seung-ho, Freka’s co-founder and Chief Strategy Officer at a press event held in central Seoul on Wednesday.

The new model, Freka Hug, will fit kids between seven and 11 years old. The price was not disclosed and Korea will be the first country to offer it.

To make masks for a younger age group, it isn’t good enough to downsize an adult mask. Freka Co-founder and CEO Frank Borsboom pointed out that children’s masks need to be approached from a different perspective.

“Their body is different from ours - they need much more air relative to their body weight [as they have higher metabolisms],” said Borsboom. Kids’ masks also had to be more comfortable, as children are relatively more fussy than adults about comfort.

The Freka Hug has an upgraded filter that better blocks fine particles and with enhanced ventilation to prevent moist air filling the mask.

On why Korea is the first market to get the model, Borsboom noted that Korean parents want to purchase good-quality masks for their children to block fine dust in the air.

“A lot of Korean culture [and products] flow to neighboring Asian countries like China and India, which is why we think this is a good place to prepare for the next big step,” added Choi.