People who plan to attend the opening and closing ceremonies of the 2018 PyeongChang Winter Olympics will have to endure the cold for at least five hours, as the Olympic Plaza has no roof. 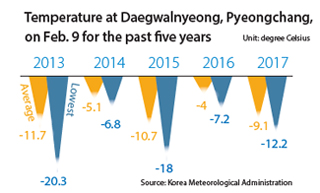 It gets a little warmer on the day of the closing ceremony, Feb. 25, ranging between 0.2 to 5.7 degrees Celsius.

“It’s hard to make any weather prediction for Feb. 9, 2018, the day of the opening ceremony, as of now,” said Yoon Ki-han, a spokesperson for the Korea Meteorological Administration. “But considering the average weather in Pyeongchang, it’ll be like the weather on Dec. 11, when there was a cold wave watch throughout Korea.”

On Dec. 11, the lowest temperature went below negative 10 degrees Celsius across the country and marked the earliest ice formation on Han River in 71 years.

Reuters reported on Pyeongchang’s cold weather on Dec. 8, saying, “The PyeongChang Games in February may feel like the coldest Olympics in at least three decades because the main stadium lacks a roof, leaving an estimate of 35,000 spectators, including world leaders, exposed to extreme cold for the opening ceremony.”

It cost 63.5 billion won ($58.4 million) to construct the Olympic Stadium. As it would cost an additional 37.4 billion won to install a roof, the PyeongChang Organizing Committee for the 2018 Olympics & Paralympic Winter Games (Pocog) decided not to do so.

Making matters worse, the opening and closing ceremonies start at 8 p.m., as per the request of NBC, the event’s main broadcaster.

Since general audiences will start entering the stadium at 4:30 p.m., and the ceremonies are expected to end at 10 p.m., they are given no choice but to stand in the cold for five and a half hours.

Though the athletes don’t have to stay out as long as the spectators, they are still required to be in the cold for at least two hours. To protect the athletes from the cold, the Olympic Committees of different countries are modifying the athletes’ uniforms.

“The health and safety of our athletes is very important,” Canadian Olympic Committee spokesperson Photi Sotiropoulos was quoted as saying on Global News. “We cannot speculate on future weather conditions but are confident that Hudson’s Bay, the official outfitter of Team Canada, will be providing our athletes with a collection of warm clothes, toques and mittens to wear during the Opening Ceremony.”

During the 2017 Dream Concert in Pyeongchang on Nov. 4, a K-pop concert, 33,000 people visited Olympic Plaza. Fans watched the performances in 3.4 degrees Celsius for four hours at night, and six people were transferred to the hospital for hypothermia. To make the stadium slightly warmer, Pocog will install a windbreaking fence, place 40 LPG heaters around spectator seats and hand out ponchos, blankets, heated sitting cushions and hand warmers.

Reuters also reported, “Some 160 VIPs will be offered thicker and bigger blankets than those given to other spectators, a committee official said.”