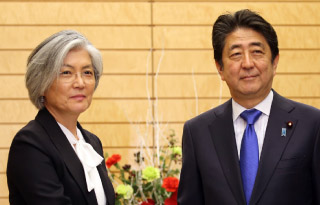 Kang Kyung-wha, the minister of foreign affairs, made a two-day visit to Tokyo this week. It’s been two and half years since a Korean foreign minister has visited Japan, the last being Yoon Byung-se in June 2015.

Kang decided to visit Japan for two urgent reasons: to discuss the task force reviewing Korea’s 2015 deal with Japan on the “comfort women” issue and PyeongChang Winter Olympics. Ministry sources say her mission was to make prior arrangements to keep the bilateral relationship on track even after the task force issues its results at the end of the year. She also wanted to make sure that Japanese Prime Minister Shinzo Abe attends the Olympics despite the controversy.

Her first Tokyo trip is hardly an easy one, as Japan thinks the Moon Jae-in administration is considered unfriendly toward Japan. Before returning to Seoul, Kang met with reporters and seemed exhausted. “Korean and Japanese foreign policy authorities shared the feeling that the situation should be controlled properly and challenges should not amplify,” she said.

However, the bilateral relationship is not likely to remain calm after the task force’s findings are announced and the government takes follow-up measures. And as expected, Abe did not confirm his attendance at the Olympics.

Diplomatic sources have mixed views on Kang’s trip. Some Blue House staffers with a firm stance on Japan opposed her visit. I heard that some asked the minister why she wanted to go at such a sensitive moment, and Kang responded that it was necessary to offer explanations and keep the window open for talks. She argued that discouraging the visit was like suspending Korea’s relationship with Japan.

While President Moon has not mentioned anything specific about the comfort women deal since his election, he expressed intent to renegotiate the agreement that pays reparations to women forced into sexual slavery by the Japanese military during World War II.

The explosive comfort women issue can be an attractive card to play for the current administration, especially since a local election is set to take place next year. Ministry sources say that former democracy activists are in key positions in the Blue House, and they believe scrapping or renegotiating the deal with Japan inevitable.

The PyeongChang Winter Olympics will be held as a nuclear crisis threatens the Korean Peninsula and Northeast Asia, and a variable that may shake the Korea-Japan relationship is about to explode. Kang went to Japan to minimize diplomatic discord at this juncture, and those who discouraged her trip may have been too emotional to handle Korea’s diplomacy.

*The author is deputy international news editor at the JoongAng Ilbo.