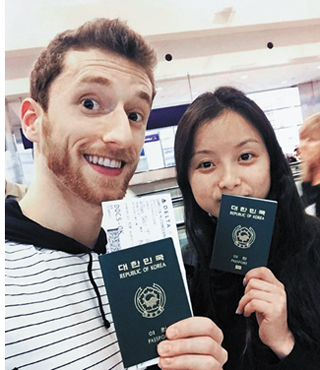 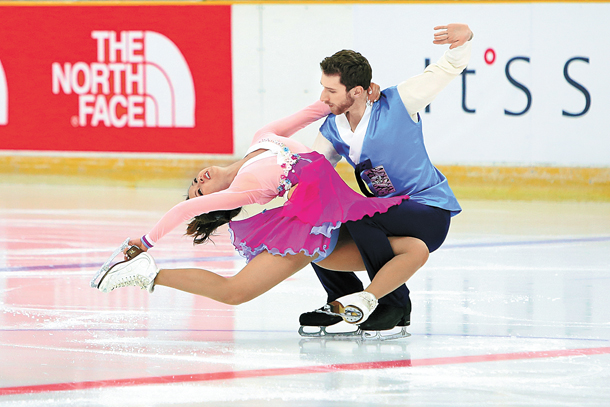 Min Yu-ra, left, and Alexander Gamelin skate their free dance program during the second round of the Korean national team qualifying competition for the 2018 PyeongChang Winter Olympics on Nov. 3. [KOREA SKATING UNION]

Korea will have an ice dance team competing at the Winter Olympics for the first time since the 2002 Winter Olympics in Salt Lake City, as Min Yu-ra and Alexander Gamelin earned a berth to the event through their impressive performance at the 2017 Nebelhorn Trophy competition.

Min and Gamelin finished in fourth at the Nebelhorn Trophy in September to take their place in the 2018 PyeongChang Winter Olympics. Only the top five teams at the event were given spaces at the Games. After receiving 55.94 points in short dance, taking seventh, the two made a jump to fourth after receiving a score of 87.86 points in the free dance program.

Min, a Korean-American born in California, started figure skating at age six and competed in single skating until 2010. When Min switched to ice dance in 2011, she struggled to find a partner, as there were few ice dance skaters in Korea. Min competed with three different foreign skaters, but they didn’t last long.

While Min was struggling to find a partner, she met Gamelin. The American had competed in ice dance with his twin sister, but also was on the search for a new partner after his sister retired. Since both skaters trained under the same coach, Igor Shpilband, the two quickly became a pair, with their hopes focused on the Olympics. 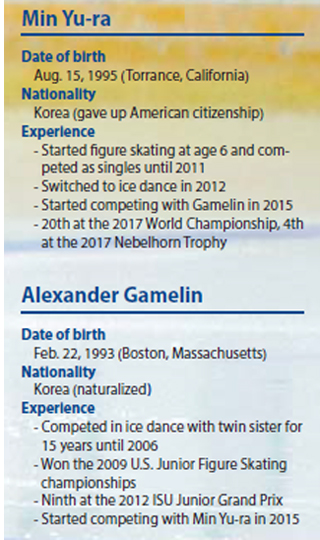 However, as they held different nationalities, competing together would be difficult. Min, born a dual citizen, gave up her American citizenship when she decided to skate for Korea.

Though the Grand Prix, World Championship and other international events held by the International Skating Union (ISU) allow skaters of different nationalities to compete together, ice dance skaters must be of the same nationality to compete in the Olympics. Gamelin, however, managed to earn his Korean citizenship in July through a special naturalization process for athletes.

Kim Yuna skated to “Homage to Korea” at the 2011 World Figure Skating Championships, but traditional music was never played at the Olympic ice rink. In addition, the pair will be wearing hanbok, traditional Korean clothing.

Though Coach Shpilband was opposed to the idea of using traditional music and clothing, as he didn’t think it would appeal to foreign judges, Min and Gamelin thought it suited them perfectly.

Both Min and Gamelin believed that there was no better music to use on the rink than “Arirang,” one of Korea’s most-loved songs, as athletes representing the country.

But to listen to “Arirang” at the PyeongChang Olympics, they will have to skate well on the first day of competition. The ice dance event takes place over two days, and only the top 20 teams out of a total of 24 teams get to compete on the second day.

Since free dance is held on the second day, Min and Gamelin have to finish within the top 20 in the short dance program. Looking at the pair’s steady improvement, it is likely they will. During the 2017 Four Continents Figure Skating Championships, also considered an Olympic test event, the pair finished in eighth.