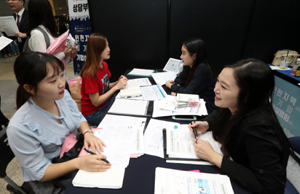 A businessman moved to a small company as a board member after it recently drew an investment worth tens of millions of dollars from a foreign investment bank. However, as the new company is not a famous one in the business, he had to spend a few months touring universities to explain to students the merits of his company instead of trying to find profitable projects.

“It is very fortunate for us to be able to explain the strength of our company together with the investment bank,” he said. “If a representative of the bank says it decided to invest in our company because of our bright future, that surely helps job-seeking college students listen to my explanations.”

That enterprise is a very exceptional case. A number of small and mid-sized companies are not given an opportunity to hold the “milk round,” not to mention a lack of investment banks that would help ensure their robust visions. Even if they stage a job fair, job-seekers won’t pay attention.

During an interview a couple years ago, the CEO of an SME asked me to introduce the name of his company in our newspaper. Despite its remarkable performance in exporting top-caliber tiles overseas, he said he had trouble recruiting talent because the company was not well-known. “Enterprises like ours need more workers to grow further,” he complained, “but really qualified people don’t apply.”

You can hardly attribute the problem to our young job-seekers. When asked why they wouldn’t apply for SMEs with strong visions, they say they will certainly have trouble getting married later if they go to small companies.

The government has come up with a plan to support employees’ vacations as a way to promote our sagging tourism industry. The plan forces the government to bear 25 percent of the travel cost — up to a maximum of 100,000 won ($93) — from next year under the condition that companies accumulate the same share of the cost each year. The remaining 50 percent of the cost will be covered by employees themselves. But the plan will almost certainly not benefit employees of SMEs because only large companies can afford it as it is primarily based on a matching fund.

Some SMEs are even demanding their work hours be extended for eight hours a week to survive even if the government drastically cuts work hours from next year. Who would work for small enterprises under such circumstances?

The government seems to believe that if its touted “income-led growth” takes hold, the hardships facing SMEs will be eased. But that’s naïve thinking. Young job-seekers won’t work for SMEs even if they have vibrant visions and good prospects. It is time for the government to devise more delicate measures to inspire CEOs and employees of small companies.