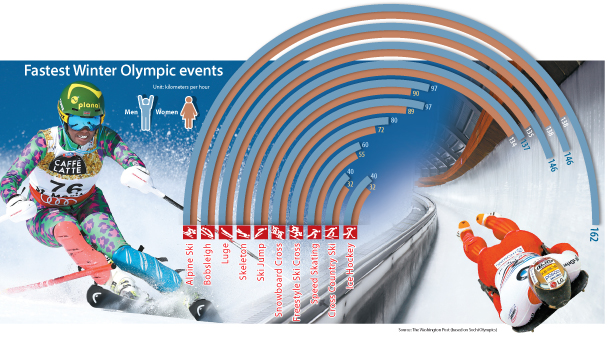 When it comes to the upcoming 2018 PyeongChang Winter Olympics, there’s no substitute for speed. Unlike the Summer Olympics, athletes travel over 100 kilometers (62 miles) per hour during some events and, with the exception of curling, figure skating and ice hockey, most of the 102 gold medals in 15 different sports will be handed out based on time.

Alpine or downhill skiing is one of the fastest Winter Olympic sports. Skiers race down slope surfaces with gradients of 15 to 30 degrees at speeds of up to 140 kilometers per hour.

French alpine skier Johan Clarey sped down 4,455 meters in only 2 minutes and 29.82 seconds at the 2013 International Ski Federation (FIS) World Cup with an average speed of 107 kilometers per hour and a top of 161.9 kilometers per hour.

A skier can go even faster during speed skiing, which requires athletes to ski downhill in a straight line. The record in this event is over 250 kilometers per hour, but was only done by a skier racing down a slope steeper than 70 degrees. Due to the high risk and danger of the sport, however, speed skiing is not an official Olympic sport.

For PyeongChang, the slope surface of the Jeongseon Alpine Centre, where the competition will take place, has an average gradient of 16 degrees and a maximum of 33 degrees.

“The speed coming down the slope depends on how the snow is set up and placed,” said Bernard Lucy, a course design specialist from Sweden who designed the slope at the Jeonseon Alpine Centre.

Though the gradient of the slope is an important factor, there are others as well. The weight of the athletes in bobsled, for instance, affects the speed at which they travel. The largest bobsleds have been 630 kilograms (1,389 pounds), which includes the sled itself and a four-person team, which consists of a pilot, a braker and two pushers. The heavier the athletes, the faster the sled can go, shortening the time to complete the race.

A 23 kilogram luge, on the other hand, faces less friction, allowing it to maintain high speeds even when it hits uphill courses. Many athletes call it a “roller-coaster without seat belts” for that reason.

With similarly-shaped sleds, luge and skeleton have a speed difference of about 10 kilometers per hour. The difference lies in the shape of the blades, called runners, as a skeleton has a tubular blade, whereby the dullness of the blades helps racers control and limit their speed, as opposed to the razor-sharp luge blades that cut into the ice. The position of the racers also influences speed. Skeleton racers plunge head first, whereas luge racers lie on their backs.

“Because skeleton racers place their head and shoulders to the front, air resistance hits rounder parts, known as blunt bodies,” explained Kim Young-gwan, professor of physical education at Chonnam National University in South Jeolla, “whereas for luge, air resistance goes against the racer’s feet, just like the sharp front of an airplane, allowing players to flow without much resistance.” Skeleton racers meet 4.5 times more air resistance than luge athletes.

Because skeleton racers go head first and have better control of their speed, the risk of flipping is greater in a luge race. Skeleton racers sled down on their stomachs, making it is easier to control their speed. Though bobsledding is the fastest of the three, in general, athletes only sustain minor injuries due to the sturdiness of the sleds.

Finally, there’s ski jumping, which is so fast that judges count nanoseconds. All this makes for a thrilling show, but these high speeds also mean athletes are at far greater risk. Indeed, since being introduced in 1924 in France, the Winter Olympics have seen two skiing deaths and two luge deaths, all during practices.