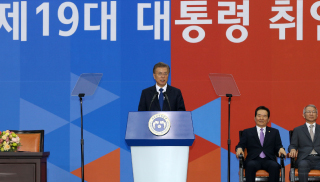 President Moon Jae-in makes an inaugural address at the National Assembly on May 10, 2017. [JOINT PRESS CORPS]

We are in a new year. We desire a safe and peaceful year under the leadership of President Moon Jae-in and the Democratic Party. In his first seven months in office, the president has warmed the hearts of the people with his passion and endeavors to connect with the grassroots. Yet there are many who believe he is too self-righteous in policy-making and communicating and overly rigid in addressing his political rivals from past conservative governments. His clampdown on so-called past ills has drawn both cheers and boos from the public.

The president, a Catholic, would know the Bible’s passage in Matthew 12:25: “Every kingdom divided against itself is brought to desolation, and every city or house divided against itself will not stand.” Former U.S. President Barack Obama famously borrowed that quote to call for unity in his divided society. Being divided against oneself more or less means a split personality. An individual, family, or country with a split identity cannot function normally and will eventually fall.

Moon must address the symptoms to avoid such a fate. He must see through his overzealous aides and supporters and their wishes to overthrow the conservatives. Their aspirations are understandable. But too much enthusiasm can crowd out common sense and the reason required to address problems in a practical context. The president must order restraint.

A good example of his contradicting philosophy is his policy on nuclear reactors. He wants to remove them from this nation out of safety concerns but is eager to export the technology abroad. The mysterious trip to the United Arab Emirates of his chief of staff Im Jong-seok underscores the limitations of his double-track policy on reactors. His policy on North Korea is equally naïve and self-deluded. He believes he can draw Pyongyang to the negotiating table even as the regime declares itself a nuclear weapons state. Even some centrist and liberal voters who like Moon personally question his government’s ability to address and solve problems. The president still enjoys enormous popularity, but his policies are losing public confidence.

A divided character can be fixed by matching actions with thoughts and words. One must see and accept reality as it is. Problems must be addressed through practical means. A cure is possible when common sense prevails. We hope to see less split personality and idealism and more of a sense of reality from the president in the new year. This is how he can succeed in leadership, restore politics, and strengthen the nation.

In his inaugural address on May 10, Moon gave hope to the people with his sincere promise to build a nation the people can be proud of. I still vividly remember his words. He touched many hearts when he said, “My head is filled with plans to open a new era of unity and co-existence,” and, “I will be a president for all. I will serve each and every one who did not vote for me.” The divided society came together when he said, “I will promise you. Today will go in the history as the day this nation became one. I will put an end to the divisive and contentious politics and conflict between the conservatives and liberals.”

I hope Moon can go back to his inaugural words in this new year. He has spent the past half a year trying to bring justice after wrongdoings of the past governments. We now hope to see his action on building unity. A nation needs both justice and unity. Iconic liberalist Ri Young-hee, whom the president reveres, once said “A bird cannot fly on one wing. It needs both wings on the left and right to fly.”