Time to be careful

Time to be careful 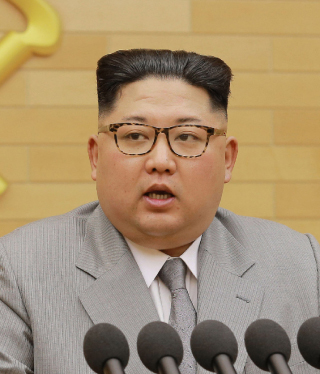 The year of the dog, with its zodiac qualities of sincerity, devotion, and harmony, has arrived. Many will have new wishes for the new year but nevertheless share a common hope of peace and abundance. To us on the Korean Peninsula, the year 2018 could be a turning point. If this year passes peacefully, we may have hope for a new future. If not, a tragic history could repeat itself on this land.

Unsurprisingly, North Korean leader Kim Jong-un made a peaceful overture in his New Year’s address. With newfound confidence from a self-claimed near-completion of nuclear weaponization, Kim proposed inter-Korean dialogue. He is showing a willingness to come to the negotiating table and mend ties with South Korea now that his regime has the capacity to fire a nuclear-tipped missile across the Pacific and hit anywhere in the United States. Kim looked confident and relaxed as he offered well wishes for the Winter Olympics in Pyeongchang to show off the abilities of the Korean race and suggested a dialogue to discuss the dispatch of a North Korean delegation to the sports event. Kim also suggested talks in order to ease tensions ahead of the international games.

He declared that the regime last year perfected its nuclear armaments and secured “irreversible” war deterrence capabilities. “We now own powerful deterrence against any U.S. hazardous actions,” he declared. Whether others recognize it or not, he claimed that North Korea has become an “unquestionable” nuclear power. He also condescendingly added that “if others do not threaten us, we will never use nuclear weapons on others.”

Kim warned that the entire U.S. mainland was within his nuclear missiles’ range and that a nuclear “button” is on his desk. We cannot confirm whether that is true or not. But from the latest intercontinental missile test on Nov. 29, he may not be entirely bluffing. Experts are still mixed in their conclusions. North Korea has never tested its long-range missile on a normal trajectory and its missiles have not demonstrated the last-stage technology of atmospheric re-entry and control over the warhead. Washington believes there remain from three months to two or three years left before the threat is real. The United States would likely strike if North Korea does blast off an ICBM at a normal trajectory, possibly triggering a war on the peninsula.

South Korea and Japan come under imminent danger in a war scenario. The two states fall in the target range of both short- and mid-range missiles. A slight change in the direction also puts China in danger. The three nations are all hostage to North Korea’s nuclear threat.

The danger puts Beijing in a dilemma. To stop South Korea, Japan, and even Taiwan from going nuclear, it must maximize pressure on North Korea. But it fears a collapse of the Kim Jong-un regime, which could bring floods of refugees across its border and possibly invite a North Korean nuclear attack in the process. China cannot be excluded from North Korea’s list of potential threats to its sovereignty. Kim clearly sent a message to Beijing by refusing to meet with a special envoy of President Xi Jinping.

The Moon Jae-in administration must be extra careful in responding to Kim’s latest peace offensive. The proposal for inter-Korean talks to dispatch a North Korean delegation to the Olympic Games is too tempting to refuse. Seoul has already asked to hold military talks in order to ensure peace and safety during the games. Pyongyang could offer not to attempt missile and nuclear provocations in return for Seoul’s rescheduling of regular joint drills with Washington. But that is as far as Seoul should go.

Pyongyang is cementing its status as a nuclear weapons state. We have two options. We must mount maximum pressure on the regime with the international community to force it to surrender its weapons program. Seoul must not veer away from the concerted front. Seoul, Washington and Tokyo must entice Beijing to tighten its pressure. Seoul must not overreact to Pyongyang’s proposal. Seoul would be making a suicidal move if it goes overboard with the dialogue momentum and offers to lift economic sanctions and reopen the industrial park in Kaesong or tourism projects.

Kim has crossed the Rubicon. Whether its nuclear weapons will protect the North Korean regime or bring its doom cannot be known. But the latter is more probable as it would be losing its sole ally China if it continues to take a nuclear path. Kim must not take lightly the rumors of Washington and Beijing having military talks for a contingency plan.