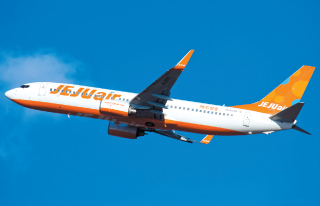 Jeju Air has been making social contributions by developing activities to benefit disadvantaged communities and providing volunteers to assist others. [JEJU AIR]

Jeju Air, the nation’s leading low-cost carrier, provides a number of opportunities to support those from disadvantaged communities. One major initiative that the company has worked on for nearly 8 years is helping multicultural families visit their homes. The project began on Nov. 24, 2010, when a routine flight between Incheon and Manila was launched. Every month, one family is given the opportunity to take a flight to visit their home. Families are recommended by the Korean Institute for Healthy Families, the Gyeonggi Provincial Government and the Korea Gas Corporation, and Jeju Air pays all the costs, including roundtrip airfare, fuel surcharges and airport service charges.

Jeju Air and Korean Open Doctors Society made a business agreement in December 2011 to help send volunteers overseas 2 to 3 times a year. Jeju Air has created a volunteer group made up of the company’s staff and medical team that assists the NGO.

After the Sewol disaster, requests for safety education increased and since 2014, Jeju Air’s cabin crews have been making visits to various organizations and schools to provide aviation safety training. During the specialized training session, representatives from the company give demonstrations on how to use emergency equipment including life vests, seat belts and oxygen masks to prepare for emergency situations. Also, directions for how to use the AED (Automated External Defibrillator) and how to conduct CPR are provided. About 26,000 people have participated in the class as of December 2017.

Jeju Air is also focused on fulfilling its social responsibility for society as a whole.

In 2007, Jeju Air established a partnership with an orphanage in Jeju and for the last 10 years, volunteers from the company’s cabin crews have been visiting the orphanage to teach English. To celebrate the 10th anniversary of their partnership, Jeju Air provided a scholarship through the Community Chest of Jeju to university students from the orphanage who received English language education.

Since January 2016, Jeju Air has also provided various cultural activities including cooking cakes and traditional food for the Gangseo Senior Welfare Center and the SOS Children’s Villages, an organization aimed at child care and self-support.

“Jeju Air and its members will continue working to find ways to contribute to society with their resources and talents,” said an official from the company.