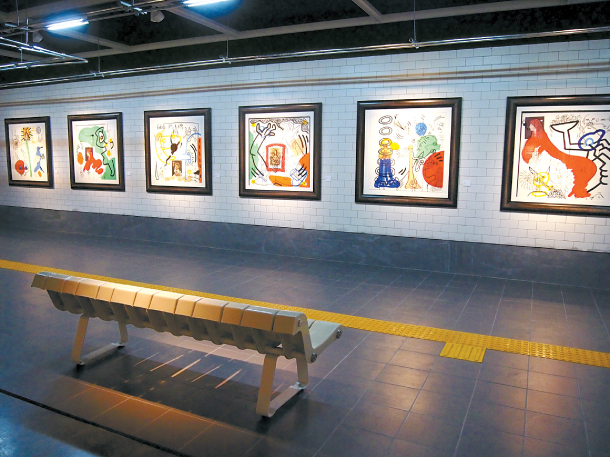 Some of Keith Haring’s works are on display at the “Hi, POP - Art: Off the Walls, Out on the Streets” exhibition, which runs through April 15 at M Contemporary, southern Seoul. The gallery has been turned into the New York City subway platform where he first presented his works. [YOON SO-YEON]

The works of the world’s top pop artists, such as the famous Marilyn Monroe prints by Andy Warhol or the iconic “LOVE” sculpture, are easy to encounter all over the world, but rarely do we get the chance to see the original pieces created by the artists decades ago.

M Contemporary, an art museum that opened last September in Gangnam, southern Seoul, is providing the rare chance to see original works at the “Hi, POP - Art: Off the Walls, Out on the Streets” exhibition that will run through April 15.

Featuring works by Roy Lichtenstein, Andy Warhol, Robert Rauschenberg, Keith Haring and Robert Indiana, the art museum built by hotel Le Meridien Seoul has gathered some 160 authentic works that have been approved by each artists’ estate or the artist themselves. Indiana is the only surviving artist out of the five who are on display.

“Pop art is an artistic movement characterized by the use of images and themes drawn from the world of mass media and advertising,” said Maria Dolores Duran Ucar, the co-curator of the exhibition, who made a visit to Seoul on Dec. 14.

“It appeared in the mid-’50s in England as a new artistic trend in reaction to abstract expressionism, considered empty and elitist. Pop art soon spread to the United States, where it really developed.”

According to the curator, pop artists commonly used silk screens to print their works not just to create a unique effect that can only be achieved through the medium, but also to defy the idea of originality and authenticity by making art that can be reproduced over and over again.

However, contrary to the way the artists sought to stand against elitist high culture, pop art and the history of postmodernity has become a field of art in itself that needs to be studied in depth to understand properly, and ironically, only the copies that have been deemed by the artists’ estates as originals are recognized as authentic.

“Hi, POP” seeks to undo that irony, in which pop art has become further away from the reach of the general public. By flying the prints to the heart of Seoul, M Contemporary allows local visitors to see the works of art close to home and presents them in an urban setting.

The exhibit features some of the most well-known works by the five artists. Be sure not to miss “Girl With Hair Ribbon” (1965), in which Lichtenstein used his signature “band-aid” texture by filling up the screen with dots; “Lucky Strike II” (1987) by Haring; and “Campbell’s Soup I” (1980) by Warhol.

To offer a richer experience for visitors, each of the gallery spaces have been decorated differently.

For instance, Haring’s section has been turned into the New York subway platform where he first presented his works.

The gallery that holds the work of Indiana has recreated the studio where he works.

“The ‘Hi, POP’ exhibition will serve as a means of time-travel, taking place in a museum at a time when the boundaries between the museum and everyday life are becoming increasingly obsolete,” said Woo Hyun-jung, co-curator of the exhibit.