Sports have their limits

Sports have their limits 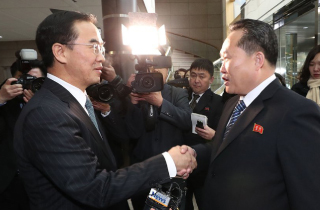 Cho Myoung-gyon, unification minister and head of the South Korea delegation, greets his counterpart Ri Son-gwon, chairman of the Committee for the Peaceful Reunification of the Fatherland, Tuesday at Panmunjom to discuss ways for North Korea to participate in the PyeongChang Winter Olympics. [YONHAP]

During World War I, British and German soldiers faced off against one another in a tedious lull in December 1914 following the indecisive First Battle of Ypres in West Flanders, Belgium. Amidst periodic shootings, some soldiers began to exchange seasonal greetings, food and souvenirs on Christmas Eve. Then, all of a sudden, a German soldier began singing a Christmas carol, soon followed by a chorus between the troops in the two trenches.

Ceasefires became somewhat official on Christmas Day. The soldiers played football matches in no-man’s land. One letter from the battlefield said, “The English brought a soccer ball from their trenches, and pretty soon a lively game ensued. How marvelously wonderful, and yet how strange it was.” There is probably nothing better than sports to simmer down a fight between two men.

Because of their mystical power over men, sports are often used as a diplomatic tool. For instance, table tennis was instrumental in the historic normalization of ties between Washington and Beijing. In 1971, a Chinese team gave a ride to an American player who missed his bus to the World Table Tennis Championship in Nagoya, Japan. He later said in an interview that he wanted to visit China one day. The Chinese immediately invited the U.S. team for a friendly match in China, setting the stage for the historic visit to Beijing by U.S. President Richard Nixon.

Sports diplomacy has often been used on the Korean Peninsula. Unlike the East and West Germans, who competed against one another, Koreans put efforts into arranging a united team or joint entries in international games. Since the 2000 Sydney Olympics, the two Koreas have marched under a united flag nine times in opening ceremonies of international games. Sometimes they excelled as a single team. South Korea’s Hyun Jung-hwa and North Korea’s Li Bun-hui beat the world’s most powerful Chinese duo to win the 1991 World Table Tennis Championships in Chiba, Japan. After the victory, the entire teams, coaches and even the spies supervising them on both sides jumped in joy hugging one another. Regardless of those touching moments, however, North Korea has never stopped its provocations.

The two Koreas held high-level talks Tuesday to discuss North Korea’s participation in the Feb. 9-25 PyeongChang Winter Olympics. It would be a symbolic breakthrough in the tension-strained peninsula if the two Koreas can form a joint team or walk side by side into the opening ceremony. The Moon Jae-in administration hopes for such a breakthrough to build momentum for a peaceful solution to the North Korean nuclear problem. Soon after his inauguration, Moon invited North Korea to the PyeongChang Olympics during the opening of the World Taekwondo Championships in Muju in June last year.

It would be a serious delusion if our leadership really thinks North Korea’s presence in Pyeongchang would change the security conditions on the peninsula. October 2006, when inter-Korean relations were at their best, was the perfect time for the pro-North Korea Roh Moo-hyun administration to discuss a joint entry to the 2008 Beijing Olympics. But Pyongyang went ahead with its first nuclear test at the time. To North Korea, sports partnerships and military interests are clearly two different matters.

We must not raise too much hope about North Korea’s participation in the PyeongChang Games. No matter how many gold medals a joint Korean team wins, the North Korean threat does not go away.

Chang Ung, a North Korean IOC member who attended the World Taekwondo Championships in Muju last year, said that politics is higher than sports when asked if North Korea is willing to form a joint team for the Winter Olympics to be held in South Korea. We could be excited by the scenes of the two Koreans competing on the same team at PyeongChang. But that excitement does not last long. We must not be fooled again.