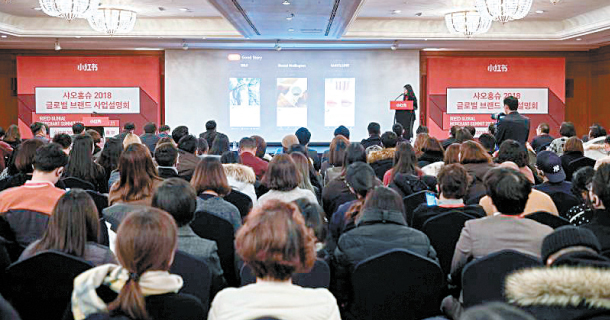 When Miranda Qu established Xiaohongshu five years ago, she did not imagine the online community for shopping tips would turn into an e-commerce platform with more than 75 million registered users.

“E-commerce business was not part of our original plan, but it did not take much time for us to realize that our users wanted to make purchases on our site after checking out shopping information,” Qu said on Thursday.

Xiaohongshu users share their shopping experiences on their personal accounts and those who like the items can directly go to the product page by clicking the tags.

Its daily sales surpassed 1 million yuan ($154,000) soon after it began shopping service in early 2015, and in one month, monthly revenue reached 100 million yuan.

“There is strong demand for Korean products among our users,” she said, noting that fashion and beauty products are especially popular. “They are what Chinese like the most among Korean products and what Koreans are best at.”

AmorePacific, Korea’s No. 1 cosmetics maker, said its sales from the Chinese platform skyrocketed 800 percent in 2017 on-year. It did not disclose the actual sales figures.

Despite the months-long feud between Seoul and Beijing over a U.S. antimissile system, the Chinese entrepreneur expressed optimism for improvement in the business climate.

“I’d be lying if I said that none of our users hesitated from buying Korean products in the face of the diplomatic row, but there has been a steady need for Korean products and I believe the situations will get better this year,” she said.

Beijing has taken a series of retaliatory economic measures against Korean companies after Seoul decided in 2016 to host the Terminal High Altitude Area Defense (Thaad) system, which China sees as a security threat. The two countries agreed to bring their frayed ties back on track in late October.

Qu said Xiaohongshu’s goal is to introduce more quality Korean products to Chinese consumers, regardless of whether they are big names or not.

“We are not only working with major Korean firms, but also with smaller companies that are less known by Koreans,” she said.

“The market is huge, and we expect that our collaborations with promising Korean brands will bring great results,” Qu added.

Launched in 2013 as a two-person start-up, Xiaohongshu now has some 1,000 employees and multiple branches throughout China.
Yonhap