The Korean para ice hockey team has truly come a long way over the past 17 years, defeating Japan 5-0 at the semi-finals and defeating Norway 6-0 at the 2018 Japan Para Ice Hockey Championships on Saturday. 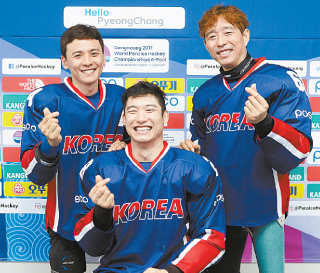 This is a significant win for the team considering Korea lost 0-13 in its first official match against Japan in 2001 in Aomori, Japan.

Earlier in the preliminary round, Korea had a big 9-1 victory against Japan. During the match, Jung Seung-hwan, known as the “Messi of the ice rink” for his speed, scored one goal with four assists and five points.

The Korean team was formed in 1988 by Lee Sung-geun, who was originally an ice hockey player. But after a spinal injury, Lee could no longer play able-bodied ice hockey and instead turned to para. To be eligible for para ice hockey, athletes must have some impairment in the lower part of their body that prevents them from playing in able-bodied ice hockey.

Para athletes use double-bladed sledges that allow the puck to pass beneath, while using two sticks with spiked ends to help propel them forward and bladed ends for shooting.

After hearing about the Japanese para ice hockey team, Lee gathered athletes with disabilities in other sports and in 1998 invited the Japanese team to hold a workshop in Korea as well as compete in a friendly. He then created the Yonsei Eagles, an official ice sledge hockey club.

“Though other athletes tried to cheer me up by telling me I played well, I was still really angry,” recounted Han Min-su, who played in Turin. “But with the recent 9-1 win against Japan, I thought to myself, ‘Wow, the world is changing.’”

The Korean team only started advancing when Gangwon created the Gangwon Province Hall Para Ice Hockey Team in 2006 and employed athletes for the national team.

The decision clearly paid off as the team came in sixth in the 2010 Vancouver Paralympics and seventh in the 2014 Sochi Games.