Thrifty sports fans can visit Olympics for under 200,000 won

Thrifty sports fans can visit Olympics for under 200,000 won 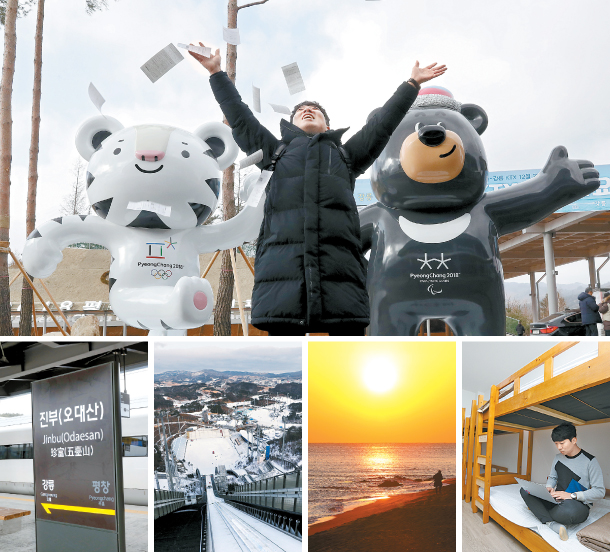 Top left: JoongAng Ilbo sports reporter Park Rin throws up the receipts for a thrifty travel agenda in front of the 2018 PyeongChang mascots near the Gangneung, Gangwon, KTX station. From left: A sign guiding travelers to the Gangneung KTX line at Jinbu Station in Pyeongchang; the view from the top of the slope at Alpensia Ski Jumping Centre in Pyeongchang, which is right next to the venue where cross country skiing will take place; Park in the six-person room at a hostel near Gyeongpodae Pavilion in Gangneung. [WOO SANG-JO]


Thrifty sports fans who want to experience the PyeongChang Winter Olympics but don’t want to break the bank need worry no more. The JoongAng Ilbo, an affiliate of the Korea JoongAng Daily, has created the “broke person’s guide to the Olympics,” proving that a weekend at the Games can be had for less than 200,000 won ($188). 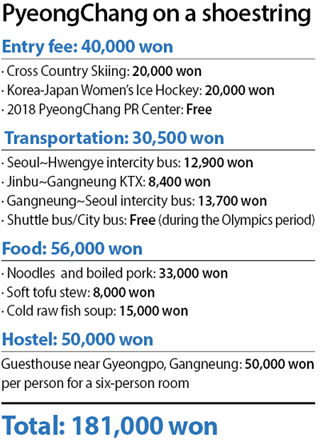 After finding their way to Dong Seoul Terminal on Feb. 13, travelers can take the intercity bus for 12,900 won to Hoenggye Bus Terminal in Pyeongchang, Gangwon - a two-and-a-half-hour ride.

Upon arrival, visitors can enjoy a bowl of cold noodles in Hoenggye for about 8,000 won. Treating oneself to a dish of boiled pork wrapped in greens (bossam) is an additional option, but will cost about 25,000 won more.

Next up is a ride on the shuttle bus - scheduled to run for free during the Games - to Alpensia Cross-Country Skiing Center to watch the Men’s/Ladies’ Individual Sprint Classic skiing match from 5:30 p.m. until 10 p.m. Though viewers can obtain an A category seat, it can be quite costly at 70,000 won. Instead, a B category ticket goes for just 20,000 won. B category comes at a price though - spectators will have to stand for the entire four-and-a-half hour event.

Tickets are also available for 20,000 won in other sports including bobsleigh, biathlon, Nordic combined, luge, skeleton and the preliminary rounds of the women’s ice hockey, if spectators choose to go on a different day.

People leaving the match before 7 p.m. can take the last intercity bus from Hoenggye to Gangneung city, Gangwon for 2,500 won to arrive at a guesthouse, which will cost an average of 50,000 won per person for a six-person room in the city.

For those keen skiing fans determined to stick around to the end of the event, the KTX might be the best option. After taking a shuttle bus to Jinbu station, weary travelers can purchase an 8,400 won KTX ticket to Gangneung - a 17-minute journey - and then ride a city bus to arrive near Gyeongpodae Pavilion. During the Olympics the city buses will run for free.

Stepping off the bus, guests can either stay in a hostel for 50,000 won a night or go for the truly cheap option - the jjimjilbang (Korean sauna). There are six jjimjilbang in Gangneung with entrance fees between 9,000 to 12,000 won. If you can manage sleeping on a hard, warm wooden floor surrounded by a horde of complete strangers, the jjimjilbang is the place for you.

On the morning of Feb. 14, visitors can enjoy a bowl of traditional sundubu jjigae (soft tofu stew) for about 8,000 won at Chodang Dubu Village in Gangneung, famous for its tofu. One sundubu restaurant at the village prides itself on being over 400 years old.

After the meal, the PyeongChang 2018 House, the Public Relations Center near the village, is next on the schedule. The House is constructed in the shape of a star, which is part of the PyeongChang emblem, with five cargo containers each representing the Olympic colors - black, blue, green, red and yellow. Entrance to the house is free, and it is located at the Green-city Convention Center in Gangneung.

Following the house, travelers can eat a bowl of mul hoe (cold raw fish soup) for a late lunch for 15,000 won near Gyeongpodae Pavillion. Gyeongpo is popular for its sliced cold raw fish, as it is located on the east coast.

Now for the highlight of this tour, travelers can ride a free shuttle bus to Kwandong Hockey Centre in Gangneung and watch the Korean women’s ice hockey team face the rival Japanese team from 4:40 p.m. to 7:00 p.m. The cheapest tickets for the event go for as little as 20,000 won.

But to catch the last intercity bus back to Seoul, viewers will have to leave the match around 7 p.m. They can catch the 7:50 p.m. bus from Gangneung to Seoul for 13,700 won to conclude their tour.