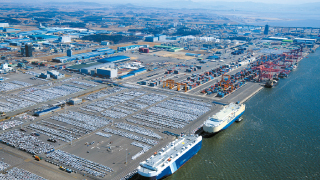 Aerial view of the Port of Pyeongtaek in Gyeonggi. [GYEONGGI PYEONGTAEK PORT CORPORATION]

The Port of Pyeongtaek is Gyeonggi Province’s only international trade port to Seoul and has seen rapid development in recent years thanks to a steady increase in trade volume, especially from China.

The Gyeonggi Pyeongtaek Port Corporation has been actively turning Pyeongtaek into Korea’s best port for importing and exporting cars. It hopes to continue developing the port into a Northeast Asian hub through the opening of a new Northeast Asia route.

Hwang Tae-Hyun became chief executive of the corporation in September and recently celebrated his 100th day in office.

“The Port of Pyeongtaek is very promising in that it will keep developing with the global expansion of shipping networks because of nearby industrial complexes and the Yellow Sea Free Economic Zone,” Hwang said in an interview about the corporation’s plans for 2018. “We look forward to expanding trade with Asean countries and establishing practical strategies. 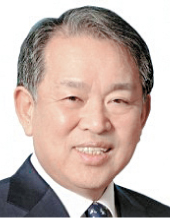 “Publicity and profitability will be balanced, and our public corporation will become a small but strong business,” he added. “We will finally be able to lead regional and national economic development, and we will push international exchanges to find an independent business model for the Port of Pyeongtaek.”

Hwang called for a self-sustaining revenue model that would lower its reliance on Gyeonggi. He also emphasized the importance of social contribution activities and sustainable development to make the port a source of pride for Pyeongtaek and strengthen employees.

To realize these values, the corporation will provide more educational opportunities and responsibilities for employees. Self-regulating measures will help the company abide by business ethics and laws. All of these actions will make the Gyeonggi Pyeongtaek Port Corporation a top public company in Korea.

“I feel great responsibility in being CEO of the Gyeonggi Pyeongtaek Port Corporation,” Hwang said. “Based on the management capabilities and experiences I have learned so far, this company will become a representative public corporation. I and my employees will make every effort to stand out as a leading public corporation in Korea.”