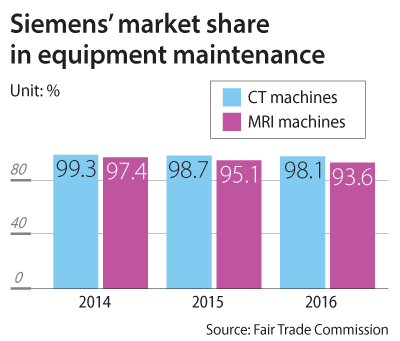 Siemens, a German manufacturer of medical equipment, was slapped with a 6.2 billion won ($5.8 million) fine on Wednesday for abusing its market dominance in maintenance services.

In a statement, the Fair Trade Commission said Siemens, along with its affiliates Siemens Healthcare and Siemens Healthineers, discriminated against hospitals that hired independent contractors to maintain CT and MRI machines.

Service keys that were paid for often came 25 days later, forcing many hospitals to delay their mandatory safety inspections.

In the United States, Siemens offers service keys for free to all clients.

Additionally, the Fair Trade Commission said the company exaggerated the risks of signing with independent maintenance companies. In two notifications sent to clients on December 2012 and May 2015, Siemens warned that equipment could incur serious damage if they are handled by outside contractors and the move could violate intellectual property rights, according to the commission.

The regulator said such actions have limited the entry of outside service providers to the market.

The fine against Siemens comes as demand for equipment maintenance has grown significantly since the Ministry of Health and Welfare cut its financial support for CT and MRI machine maintenance by 15.5 percent and 24 percent in July 2012, raising the burden for hospitals.

The local CT and MRI market has been dominated by a handful of multinational companies including GE and Phillips, though Siemens has reigned as the top supplier in the past four years. The company provides maintenance service to more than 90 percent of its clients, including 98.1 percent of CT machines and 93.6 percent of MRI machines.

The rest of the pie is shared among four independent service providers comprising mostly former Siemens engineers. However, two of the companies folded their business last year.

Along with the fine, the Fair Trade Commission ordered Siemens to provide service keys within 24 hours of request. The company was also told to inform hospitals of the changes.

It is rare for the Fair Trade Commission to issue a fine on such an infraction. The agency normally orders companies to correct the problem and never repeat it again, but the commission said it was taking a more aggressive approach on Siemens because the issue involves patient safety.

“We will continue to focus our investigation on any antitrust activities while taking firm action,” said Shin Young-ho, head of the anti-monopoly bureau, “especially on those that involve the health and safety of the public.”