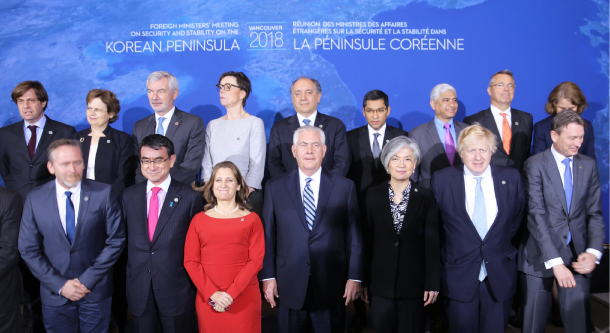 Foreign affairs ministers pose for a group photo on Tuesday in the front row of a meeting in Vancouver. From left to right: Anders Samuelson of Denmark, Taro Kono of Japan, Chrystia Freeland of Canada, Rex Tillerson of the United States, Kang Kyung-wha of South Korea and Boris Johnson of the United Kingdom. [YONHAP]

U.S. Secretary of State Rex Tillerson said it was “time to talk” with North Korea Tuesday during a foreign ministers’ meeting in Vancouver, but stipulated that Pyongyang would have to come to the table with decisive steps to denuclearize.

Refusing the path of engagement and negotiation might trigger a military response from his country, Tillerson warned.

At a press conference closing a Foreign Ministers’ Meeting on Security and Stability on the Korean Peninsula, a day-long meeting co-hosted by the U.S. and Canada, Tillerson said the best option for North Korea would be dialogue, while a “military situation” wouldn’t be a “good outcome” for them.

The conference was attended by top diplomats and military officials of some 20 countries that sent troops or humanitarian aid to the United Nations Command that backed South Korea during the 1950-53 Korean War against the communist North and its allies.

“The object of negotiations, if and when we get there, is the complete, verifiable and irreversible denuclearization of North Korea,” Tillerson said during opening remarks. “Let me be clear: We will not allow North Korea to drive a wedge through our resolve or our solidarity. We reject a ‘freeze for freeze’ approach in which legitimate defensive military exercises are placed on the same level of equivalency as the DPRK’s unlawful actions.”

South Korea’s Foreign Minister Kang Kyung-wha hailed recent talks with Pyongyang as an “important development” for the PyeongChang Winter Olympics and a “significant first step” toward improving ties between South and North, but said Seoul would fully implement UN sanctions.

“North Korea has yet to show any intention to fulfill its international obligations regarding denuclearization,” Kang said in her opening remarks. Kang credited sanctions for Pyongyang’s decision to return to the negotiating table, adding Seoul was well aware that sustained improvements in South-North relations cannot take place without advances in efforts to resolve the nuclear issue.

“As long as North Korea continues down the path of nuclear development, sanctions will remain in place,” Kang said.

“They simply want to get something out of this dialogue,” said Kono, who at one point said the regime has four main intentions: to get sanctions lifted by some countries; to obtain some financial assistance in whatever form; to cancel military exercises between the U.S. and South Korea; and to drive a wedge between “tough countries and those that are not so tough.”