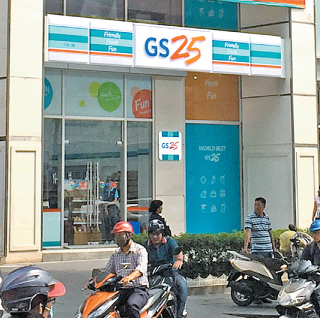 The company said in a statement Thursday that three more branches will open in Vietnam this month. Last July, the chain signed a deal with SonKim Group, a major real estate developer in Vietnam, to establish a joint venture to open GS25s in the country. The goal is to open 2,000 branches in the next decade.

The first two stores open on Friday and Tuesday in District 1 of Ho Chi Minh City, the central district filled with office buildings, hotels, trendy bars and nightclubs. The first branch is inside Empress Tower and is 87 square meters (936 square feet) in size. The second is in M Plaza and is 166 square meters.

GS25’s main customer targets for the Vietnamese market are young people in their 20s and 30s.

“Our understanding is that younger generation from teens to 20s are generally favorable to Korean culture thanks to the hallyu wave of Korean pop culture and popularity of Korean cosmetic and are more prone to try new things,” said the company.

Unlike local branches, GS25’s Vietnamese stores will have cooking stations. It will sell popular and simple Korean snacks like dumplings, cup rice and tteokbokki (spicy rice cakes) cooked on the spot. Local food like sticky rice and banh mi, Vietnamese wheat bread, will also be served.

“Market research found out that Vietnamese consumers prefer freshly cooked food and some convenience stores there have small cooking stations,” said a GS25 spokesman. “Our differentiating point will be that we offer Korean food.”

Vietnam’s GS25s will also have ready-made Korean snacks like boxed lunches and samgak gimbap (triangular rice balls wrapped in seaweed). The products are made at a local factory that GS25 will oversee.

“Vietnam’s economic growth rate has been high, which is why we thought it would be a good starting point for our overseas business,” said GS25 CEO Cho Yoon-sung. “We plan to launch businesses in other countries across Asia in the future, including China and Southeast Asian countries like Cambodia.”