The Korean women’s curling team, also known as Team Kim, defeated Canada’s Team Homan, the top-ranked squad in the world, in the quarterfinals of the Meridian Canada Open Grand Slam of Curling in Alberta on Saturday, but fell to Canada’s Team Carey in the semifinals to settle for a third-place finish in the tournament. 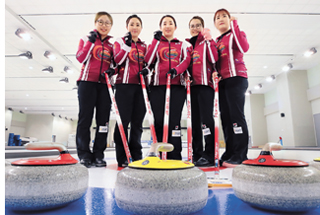 Team Kim poses for a photo at the Jincheon National Training Center in North Chungcheong on Jan. 4. Four players compete in each match, but a team can field up to five people. [YONHAP]

Curling, sometimes known as “chess on ice,” is a winter sport where the team’s captain, the “skip,” slides stones toward a target on ice while others sweep with a broom to get the piece as close to the target center as possible.

Each team has four players and is usually named after the captain, though in the case of Team Kim, all of the members are surnamed Kim. Each team slides eight stones per end, and the team with the higher score by the 10th end wins.

Before the playoffs, Team Homan won all three of their preliminary-round games to advance to the quarterfinals, while Team Kim barely made it through, having lost their first two games and winning the next three.

The Koreans had their work cut out for them. Team Homan, named after their captain Rachel Homan, is the reigning world champion. The four-woman squad won the CPT World Women’s Curling Championship in Beijing last year with an undefeated record. They will be representing Canada in women’s curling at the PyeongChang Winter Olympics next month.

Despite the odds, Team Kim managed to defeat Team Homan 7-4. Until the fifth end, the Koreans were leading 4-3 and then scored three more points in the sixth. Team Homan added one more point in the seventh end, but it was not enough to catch up to the Koreans, knocking them out of the tournament and sending Team Kim to the semifinals.

In the semifinals, Team Kim had a bigger challenge in Team Carey, a Canadian squad led by Chelsea Carey. Until the sixth end, the two were tied 4-4, but a slip-up in the seventh gave two points to Team Carey, allowing them to advance to the finals with a final score of 6-4 and forcing Team Kim to settle for third place.

In the preliminary round, Team Kim had also lost to Team Carey 9-1.

Among World Curling Tour events, Grand Slam tournaments like the one in Alberta are considered major tournaments, with higher prize money and higher-ranked teams. A majority of the teams competing at the Meridian Canada Open Grand Slam over the weekend are also representing countries at the Olympics, making it a practice tournament before the Winter Games.

Korea is paired with Canada in the preliminary round at the Olympics. Team Kim is scheduled to play their first game against Team Homan on Feb. 15.

Since group chemistry is crucial in curling, an Olympic team is selected as a whole rather than formed specifically for the Games.