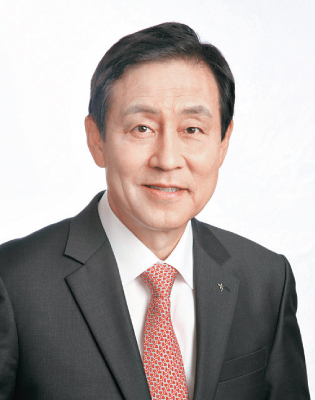 Kim Jung-tai was tapped as the next chairman of Hana Financial Group, despite government pressure to drop him as a candidate.

Kim, the current chair of the financial holding company, was nominated as the final candidate for the post on Monday following a decision by the nomination committee.

Hana Financial Group has enjoyed a solid profit and growth under Kim’s watch.

Despite the favorable numbers, Kim expected some headwinds before his nomination was finalized.

The FSS has been investigating whether KEB Hana Bank provided loans to i-KAIST, a private IT solution company at which a relative of Choi Soon-sil, Park’s confidante, worked as an executive, at exceptionally low interest rates and whether Kim was involved in the decision-making process.

The watchdog has, however, suspended the investigation after it was criticized as being overly involved in the leadership selection process of a private company.

The FSS also launched an inspection on corporate governance of local financial holding companies on Monday, although it excluded Hana Financial Group this time around. The watchdog is expected to resume the investigations after Kim is officially appointed.

If the appointment is approved by the board of directors and shareholders in March, Kim will serve his third term as the chief executive of the group until 2021. His predecessor Kim Seung-yu also served three terms before stepping down in 2012.