Digital nomads find ways to work for themselves : Technology allows for many to break away from the office

Digital nomads find ways to work for themselves : Technology allows for many to break away from the office 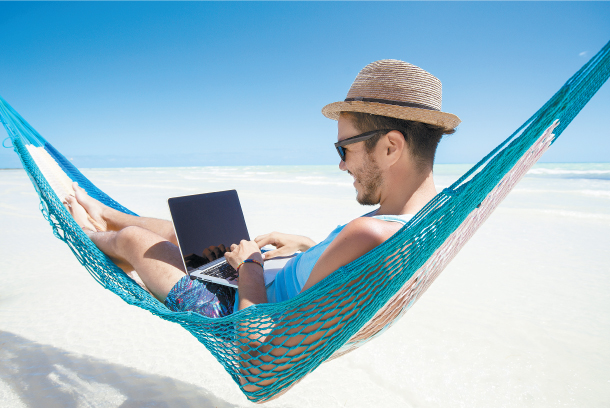 Thanks to advances in technology, the digital nomad lifestyle has become popular in Korea over the past few years, and a number of websites that share information on a nomadic life has increased. [SHUTTERSTOCK]

Thirty-three-year-old project creator Hee Jung Anna Cho is never in one country for more than six months. Over the past few years, she has spent half of the year abroad and the other half in Korea. Currently, she is in Chiang Mai, Thailand, where she is working on the mobile application Spark Quote, which visualizes meaningful quotes for users. By putting herself in a different environment every six months, Cho says she can “stay creative, inspired and alert.”

Having the flexibility to work outside of an office and check in wherever and whenever you please may sound like a dream to most workers, but for many like Cho it has become a reality.

Believing that this flexibility increases work efficiency and happiness, a growing number of people have chosen to become remote workers, or “digital nomads.”

The author’s personal story was refreshing, but was not unheard of for many who had realized that rapid advancements in technology will eventually result in the “end of employment and [a] rise of crowd-based capitalism in which most of the work force shifts from a full-time job as a talent or labor provider to run a business of one,” according to Arun Sundararajan, a professor at New York University’s Stern School of Business and a leading expert on the sharing economy. Almost half the working population in the United States will trade skills via online platforms in the next 20 years, according to the professor.

Over the past few years, the digital nomad concept has become popular in Korea. It came to be understood as an enticing way of pursuing a lifestyle that allows people to travel and see the world while still making money and continuing their career. A Korean translation of “The 4-Hour Workweek” was published in October 2017, and online communities focusing on digital nomadism, like the Facebook group “Korea Digital Nomads,” which Cho co-operates, started to pop up across social media. The group has more than 1,000 members as of December.

“[Being a] digital nomad became a popular concept after people started placing [greater importance] on having a work-life balance,” said Prof. Lee June-young, who teaches in the department of consumer and housing at Sangmyung University. “In the coming years, labor will revolve around on-demand businesses. So instead of signing contracts, more people are likely to work as freelancers based on their skills.”

“[Being a] digital nomad is beyond having the freedom to work without [environmental] limitations, and is also about networking and collaborating with fellow digital nomads,” the professor added.

Digital nomad Lee Jong-in, who works as a writer, live streamer and online marketer, defines digital nomads as “people who freely work in the locations they want to using technology like a laptop, a tablet PC or a smartphone.” Lee, who is also planning to open an independent bookstore in Wando, South Jeolla, added, “I don’t think being a digital nomad is a new type of occupation, but rather a lifestyle that has become feasible through the development of technology.”

Different reasons inspire people to become digital nomads. Lee felt disillusioned with his hectic city life, while another digital nomad Yoon In-seok, a writer based in Brooklyn, opted for the lifestyle because he “gradually realized that I do not like working for other people” after working as a journalist for some time.

The reason Cho chose the digital nomad lifestyle was because she loved her job so much that she wanted to approach her work more freely and creatively. “Having the freedom to try whatever project you wish to work on without worrying about its potential profitability or environmental limitations is what has driven me to live as a digital nomad,” said Cho.

Regardless of the reasons, one commonality they share is a sense of jealousy from those around them, many of whom are afraid to embrace the instability the nomadic lifestyle could add to their life.

When hearing about digital nomads, many conjure up an image of a free spirit that pursues the “You Only Live Once,” or YOLO, lifestyle. A Google search of “digital nomad” brings up images of individuals lounging in the sun near a stunningly beautiful beach while working away at their laptop.

But that is just a fantasy, according to Lee, as the concepts of YOLO and digital nomads are completely different.

“Though those images reflect the positive aspects of being a digital nomad, the actual life isn’t as fantastic as it seems,” Lee said, saying that YOLO refers to a lifestyle of focusing on happiness in the moment, while being a digital nomad is about making active choices about where one works.

(In fact, based on experience, Lee says that working by the beach is full of difficulties, like the inability to charge one’s laptop or properly see the screen due to sunlight. Getting an eyeful of sand is also another common problem people encounter while working at the beach.)

Working by the beach or traveling frequently is just one of the many options digital nomads have to decide on when choosing how best to work and spend their time.

“The key point to living a digital nomad lifestyle is a matter of whether you are working in a way that you want to rather than how often you get to travel or work near the beach,” said Cho, implying that people’s common fantasies about a nomadic life are not necessarily realities for digital nomads.

That explains the frustration digital nomads often feel about how their lifestyle is commonly perceived.

Park In, who goes by Lynn, says she feels “allergic” to the term “digital nomad” because it has become “too commercialized.”

According to her, a tremendous amount of misinformation about how to become a digital nomad circulates around online communities, social media and blogs. Taking advantage of dreamers, there are also a number of Ponzi-scheme programs in Chiang Mai, Thailand - a popular spot among digital nomads for the city’s affordable living costs and comparatively fast internet.

Park, who has lived in various countries, including Morocco, Germany, India and Vietnam over the past four years, says that being a digital nomad is not a lifestyle that fits everyone. However, it is often described online as “a paradise for all people,” widening the gap between the dream and reality.

“[Being a digital nomad] should be considered a lifestyle instead of a purpose,” says Park.

Who is it for?

The many misconceptions about the lifestyle of digital nomads explains why the community warns those who find their lifestyle appealing to have a specific reason why they want to switch things up, and to seriously think about which skills and means they will make a living out of.

“The most important thing is you have to know why you want to become a digital nomad. If you don’t have an answer to the question, it will be difficult for you to get back on your feet when you are forced to return after failing,” said Cho.

Park, who teaches online coding classes with a Colombian partner, says, “You have to possess the specific skill of being able to make a living abroad. Otherwise, you will have no choice but to cut down on your spending, which will just make you turn into a traveler with a light pocket.”

According to Jeong Ji-hoon, a futurist and professor at Kyung Hee Cyber University, the prevalence of digital nomads “has provided a chance for people with a distinct [working style] and creativity to grow their [name] value through [online] networks, giving them more wealth.” However, Jeong stressed that looking from a different perspective, this also means “individuals without unrecognizable skills may live unstable lives without a social safety net.”