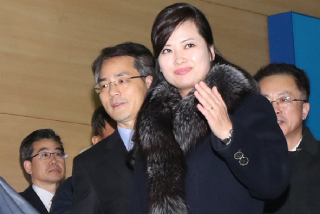 Hyon Song-wol, leader of the Samjiyon Orchestra, waves to the press on Monday before she returns to North Korea after inspecting concert venues. [JOINT PRESS CORPS]

The two-day visit by Hyon Song-wol, leader of North Korea’s Samjiyon Orchestra, drew attention not only from South Korea but also from foreign media including CNN. Cameras captured the moments of her smiling without answering questions or having breakfast.

At the meeting on Security and Stability on the Korean Peninsula in Vancouver on Jan. 16, U.S. Secretary of State Rex Tillerson said, “We should not be naive about their intent nor should we be blinded by North Korea’s charm offensive.”

But Pyongyang is gearing up with its charm offensive even though it is not confirmed whether Kim Jong-un’s sister Kim Yo-jong, first deputy director of the Organization and Guidance Department, will lead the North Korean delegation to the Olympics.

Tillerson, a dove in the Trump administration, said that North Korea’s intention in engaging in talks while adhering to nuclear missile development was an attempt to seek financial assistance and have sanctions lifted through the goodwill of certain countries. Though he mentioned “certain countries,” he may actually be referring to South Korea.

It is more than travel restrictions for individuals. As the provision of accommodation and transportation for the North Korean delegation during the Games does not involve direct assistance, it will be excused upon discussion. Because the United States does not allow the direct and indirect export of its products or services to North Korea, it needs to be checked if the service provided to the North Korean delegation includes anything from the United States. There are obstacles to overcome in order to maintain the Korea-U.S. alliance and cooperation while encouraging the reconciliatory mood of the PyeongChang Olympics.

North Korea may argue that they are attending the sports events of the Olympics without asking for cash or the reopening of the Kaesong Industrial Complex. It believes they are wrongfully accused for violating sanctions. What about North Korea accepting peace talks for denuclearization to help clear the suspicion of the international community that Pyongyang is using the Olympics as propaganda to get recognition for its nuclear armaments?

Furthermore, what if Kim Jong-un led the delegation? The sanctions controversy would subside and PyeongChang will be a festival of peace.

*The author is the Washington correspondent of the JoongAng Ilbo.