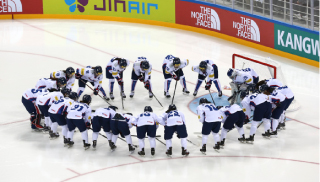 Thousands of replies were posted on the JoongAng Ilbo article titled, “Working at a Dumpling Restaurant and Making the National Team: the Candlelight Generation and the Joint Team Controversy.” Most criticized the decision to form a joint women’s ice hockey team of South and North Koreas for the PyeongChang Winter Olympics without convincing the players in advance. Some were angry because the 22-member roster would include three North Korean players, and as a result, four South Koreans would not be able to play.

In 2010, the automatic qualification of the host country was abolished. This time, South Korea regained the automatic qualification as the host, but it didn’t come easily. In December 2014, the International Ice Hockey Federation (IIHF) asked the Korea Ice Hockey Association to meet certain conditions, such as reasonable performance, a competent foreign head coach and inclusion of naturalized foreign athletes. The IIHF made these demands for reasons.

The South Korean women’s ice hockey team was a “punching bag” until seven years ago. Between 1999 and 2011, the South Korean national team participated in four Asian Games and lost all of the 15 matches. The team scored four goals while opponents made 242. The sport garnered little attention, but the players did not give up the Olympic dream and worked hard.

Shin So-jeong, the goalie, went to Canada to study. Forward Han Su-jin gave up her dream of becoming a pianist, working at a dumpling restaurant in Japan and playing the sport. The IIHF recognized the passion of the South Korean athletes and efforts of the association, and allowed the automatic qualification in 2014. In April 2017, the South Korean women’s ice hockey team defeated Great Britain, the Netherlands, Australia, Slovenia and North Korea and was promoted from the IIHF Women’s World Championship Division 2 to Division 1.

Germany not qualifying has nothing to do with South Korea. Eight nations participate in Olympic ice hockey, and the first to fifth ranked countries automatically qualify, while two teams are determined in the preliminary rounds. Germany was taken out by Japan.

The joint team began training on Jan. 25. In the first match against Switzerland on Feb. 10, four South Korean players will be in the spectators’ seats without wearing uniforms. Lee Min-ji, who did not make the final 22-member roster, wrote on her social media, “Every minute and second in the game is important to the athletes. I don’t know how sacrificing a few minutes is not considered a lost opportunity.”