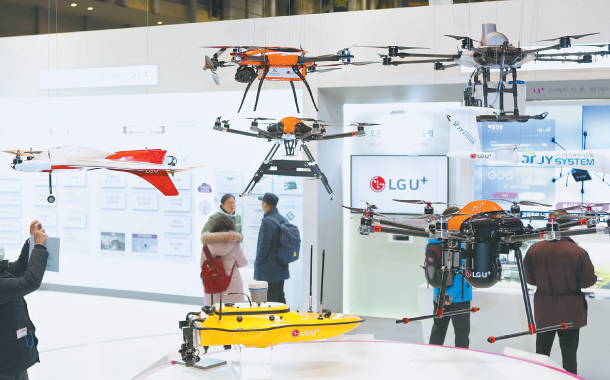 Drones are displayed at the LG U+ booth at the Drone Show Korea exhibition that started on Thursday in Bexco, Busan. [YONHAP]

BUSAN - A mini boat-shaped marine drone patrolled the waters of a seaweed farm near Haeundae Beach in Busan on Thursday afternoon. The miniature craft monitored environmental conditions including the water temperature and dissolved oxygen levels.

The drone, about 1.2 meters (4 feet) in length, was connected to the long term evolution network offered by LG U+ and was able to transmit real-time video of what it saw along with the environmental data it collected.

“Until now these farms used fixed sensors to monitor the marine environment, however farmers can now reach out several kilometers with moving sensors on drones,” Yi Young-hwa, a director from LG U+, said while demonstrating the technology in Busan. “That way farmers and fisherman can be warned of incoming red tides, green tides and all other conditions that might affect their business.”

The drone is made by local drone maker JY System. As it relies on an uninterrupted network connection to constantly share data with control centers, the company inked a partnership with LG U+ last year. The partnership enables the drone to transmit videos in real time via the LTE connection.

Users can also remotely control the drones within LTE coverage, or set starting points and destinations to allow it to autonomously drive itself. The drone is capable of operating for as long as six hours on a single charge.

This drone, however, is only one example of the new technology that LG U+ showed off during the Drone Show Korea exhibition that started Thursday in Bexco, Busan. The exhibition invited about 100 companies and institutions dedicated to developing drones including DJI, Korean Air and Korea Aerospace Research Institute.

LG U+ vowed to provide a so-called “U+ smart drone total service package” - which includes offering various mission-critical drones. The mobile carrier plans to provide its LTE module for and introduce drone-specific insurance programs as well.

Among the drones that LG U+ introduced are a crop dusting drone made with Japanese company Prodrone; a delivery drone for islands and mountainous areas developed with Hanwha Techwin; a disaster monitoring drone made with domestic maker Nes&Tec; and the marine drone made with JY System. The range is expected to increase as the mobile carrier hopes to add more customized industrial drones for enterprise customers.

LG U+ added its LTE module, LTE-powered drone controlling software and cloud storage to store transmitted data to the drones. The LTE system will later be upgraded to include next generation high-speed 5G connection.

LG U+ decided to extend its service package to also include insurance. The company is currently in talks with a local insurance company to build a new drone-dedicated program including both indemnity insurance and third party liability insurance. That way the insurance can cover damages to the drones as well as damages caused on third parties due to accidents involving the machines.

According to LG U+ the integrated service package will be released within the first half of this year, most likely between March and April.

LG U+ currently targets enterprise customers as well as public institutions. Park Jun-dong, vice president of the future service division at LG U+, said the company is in discussions with at least 10 public institutions regarding supplying its drone solution. The price for the whole package has not been finalized yet, though it will differ based on the customers’ requirements.