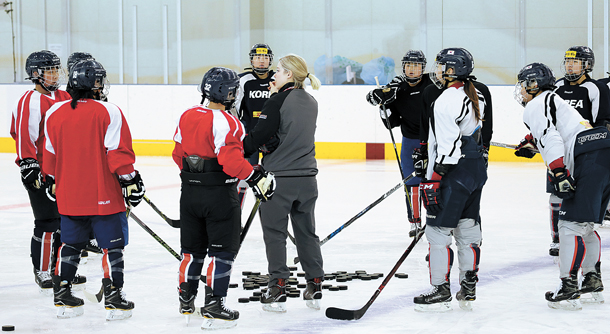 The joint Korean women’s ice hockey team, assembled for the upcoming PyeongChang Winter Olympics, had their first practice session together on Sunday.

Following the recent inter-Korean agreement and a stamp of approval from the International Olympic Committee (IOC), the two Koreas have put together a unified team of 35 players for the Olympics - 12 North Koreans have joined 23 South Koreans.

The North Koreans arrived Thursday, and Murray ran separate practice sessions for the two squads over the following two days.

While the IOC granted extra roster spots for the Korean team - all other teams have 23 players on hand - the actual game roster remains unchanged for everyone at 22 players, with 20 skaters and two goaltenders. And Murray must include at least three North Korean players in each game, under the terms of the landmark deal.