Royal bamboo investiture, thought to be destroyed, returned to Korea

Royal bamboo investiture, thought to be destroyed, returned to Korea 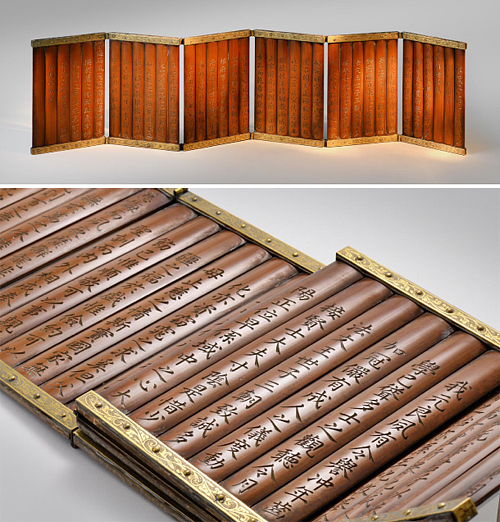 Top: Six sets of a royal bamboo investiture given to Queen Sinjeong (1808-90) when she married Crown Prince Hyomyeong of Joseon Dynasty (1392-1910) in 1819, have returned to Korea. It was thought to have been lost, but it was found in France last year. Above: Inscriptions on the investiture usually describe what the rulers should and should not do. [YONHAP]

A royal bamboo investiture, which was given to Queen Sinjeong (1808-90) when she married Crown Prince Hyomyeong of Joseon Dynasty (1392-1910), is now in Korea after it was found in France. It is the first time that such bamboo investiture has been returned to Korea.

The bamboo document was made when the queen, then known as the wife of Crown Prince Hyomyeong, was married in 1819. The successor to the throne, as well as the successor’s wife, were given documents that included writings of what a future ruler should know and instructions for what they should and should not do, alongside royal seals and more. These items gave the recipients succeeding power to reign the country, and was usually put in royal shrines after the death of the king and queen.

This particular one, according to the Overseas Korean Cultural Heritage Foundation, is an example of a classic Joseon-era bamboo investiture, as evidenced by the style of inscription and the content written on the bamboo. It has six sets of bamboo documents, each 17.5 centimeters wide and 25 centimeters high (6.88 inches wide and 9.84 inches high).

All of the existing royal seals and investitures from the Joseon era were designated part of the Memory of the World by Unesco last year as they reflect the political, economic, social and cultural trends of the time.

The investiture, which was thought to have been lost until recently, was found in France on a list of items to be shown at an auction in June 2017. The Overseas Korean Cultural Heritage Foundation found the Korean artifact, requested the auction to be stopped and then initiated talks with the then-owner for a purchase. The foundation paid 250 million won ($234,192) to purchase the document, and the funds were provided by donations from video game developer Riot Games, which has been working on many projects to protect and preserve Korean heritage since it signed memorandum with the Cultural Heritage Administration in 2012.

The jewelry shop, left, was owned by Jules Grumbach, who bought Korea’s royal bamboo investiture at a market for ancient art. The document had been handed down generation to generation. [OVERSEAS KOREAN CULTURAL HERITAGE FOUNDATION]

The last known location of the item in Korea was Oegyujanggak, the Joseon’s royal archive on Ganghwa Island, as it was listed in the book of stored items there in 1857. It was assumed that the particular bamboo document was burnt and lost during the Byeonginyangyo, the French raid of Korea in 1866, since the name of this document was never included in the list of confiscated items left by the French army.

The document was purchased by Jules Grumbach, who ran a jewelry shop, and was passed through the family from generation to generation. It is said that Grumbach bought the document at a market for ancient art in Paris.

After the crown prince died, he was given the royal name King Ik-jong, and his wife also earned her name Queen Sinjeong.

The document will be stored and used for further research at the National Palace Museum of Korea.