Striker Kim Shin-wook wants to use his head

Striker Kim Shin-wook wants to use his head 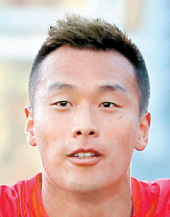 Kim showed his impressive form as he scored all of Korea’s four goals in their three pre-World Cup tune-up matches played at Mardan Stadium in Antalya, Turkey. Korea beat Moldova 1-0 and had a 2-2 draw with Jamaica before wrapping up the friendlies with a 1-0 win over Latvia on Saturday.

All of Kim’s goals in the friendlies were headers. The 196-centimeter (6 feet 5 inches) striker now has seven goals in the last six matches.

“I’ve mostly scored with my feet for the national team till recently, but I really like it when I score with a header,” said Kim after his match against Latvia. “I want to score more goals with headers.”

Kim said he will keep working hard to improve his finishing touch.

“We had two wins and one draw in pre-World Cup tune-up matches, and I personally enjoyed my four-game scoring streak,” he said. “But there are things we should improve. We need to have better touches around the net, and I feel responsibility for that.”

Korea brought 24 players to their pre-World Cup training camp, but they didn’t include Europe-based footballers, such as Son Heung-min of Tottenham Hotspur. Kim said he is confident of keeping his position in a battle against the Europe-based players, though he wants Son to score more goals for Korea.

“I’m confident, but it looks like Son will score more than I will,” he said with a laugh. “But I think Son should score more. As for the team’s perspective, we can score more goals since the opponent’s defense will not target just one man.”

Kim said head coach Shin Tae-yong is making him display his best performance with tactics that are suited for him.

“He really takes good care of me and that’s why I was able to play a good game,” he said. “He shows me some video clips before matches and tells me in detail [what I need to do].”

Korea is in Group F at the 2018 FIFA World Cup in Russia, along with Germany, Mexico and Sweden. The friendly matches against Moldova and Latvia were set up to test Korea’s competitiveness against the European opponents at the World Cup.

Kim said he and his teammates will work hard to overcome physical Europeans at the World Cup.

“Tall defenders are strong in the air, but at the same time, they’re weak against good movements and good crosses,” he said. “I’ll try to play with strong movements, and I believe good crosses will come from my teammates.”