Apps help tourists get to the Games

Apps help tourists get to the Games 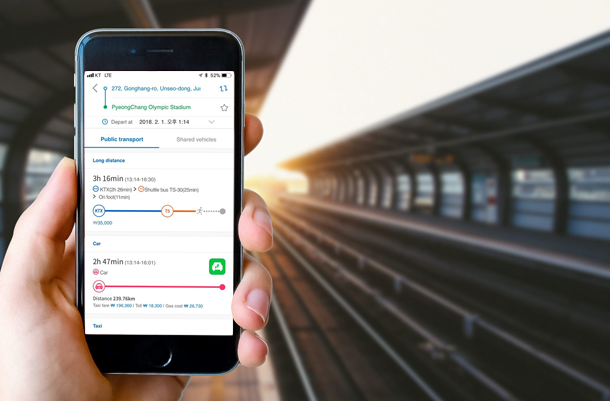 With over 1.6 million people descending on Korea for the Winter Olympics, the Games are expected to become a battleground for app developers working in translation, navigation and concierge services.

The Korea JoongAng Daily tested several apps that will likely be used by attendees of the Olympics. The reviews are based on a reporter’s experience traveling from Incheon International Airport’s Terminal 2 to Jinbu Station in Pyeongchang County, Gangwon, where the Olympics are taking place.

Whether you’re using Korean-made software like GenieTalk or the world’s most popular option - Google Translate - these apps all pretty much offer the same function: real-time translation through voice, text and image analysis.

A non-Korean speaker arriving at Incheon International Airport and traveling directly to Pyeongchang by train will find the translation apps convenient. While there certainly will be groups of volunteers ready to assist foreign visitors, these apps will help travelers get around more easily. There is even an information desk at the airport that will help new arrivals download the Olympics’ official translation app, GenieTalk.

While most apps offer more or less the same services, the difference is the number of languages they provide. Quality-wise, there is not much difference when it comes to translating between English and Korean. 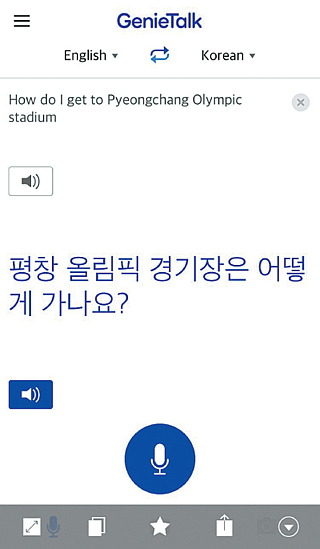 As the official translation app of the PyeongChang Winter Olympics, development started at the state-run Electronics and Telecommunications Research Institute in 2012. Hancom took over in 2015.

The app runs on so-called neural machine translation, or NMT, technology. As the program answers more translation requests, it gets better at mirroring actual human speech.

One of the key features of GenieTalk is hands-free translation. A user just has to tap on a microphone icon, and the app will follow along with the conversation, immediately providing translations as if there were a human interpreter present.

The voice function is not perfect. It occasionally fumbles with proper nouns such as names of train stations. An inquiry about the location of Jinbu Station spits out directions to “Jim Book.”

The mistake can be corrected by typing and replacing it with the right text.

GenieTalk can also analyze images, especially convenient for visitors who might not be able to type Korean text. Take a picture of a sign or menu, and the app will scan the image for text and translate it.

GenieTalk is available in 29 languages, but according to the company, eight of them - Arabic, Chinese, English, French, German, Japanese, Korean, and Russian - were developed with its own source technology, meaning the app can work in those languages with the highest accuracy.

Hancom said it has included 100,000 words in the app’s dictionary that are closely related to the Olympics, including the names of events and athletes as well as popular regional words like chodang sundubu (tofu made with seawater) and gonderebap (thistle rice), to help athletes and tourists more easily buy local food and goods.

Another distinctive feature of GenieTalk is a list of phrases that users can select in different situations.

For example, it provides a list of phrases that might be used in a conversation with police, such as “Have you seen any suspicious person in the stadium?” or “The item in our possession is prohibited inside this facility.” It also offers vocal pronunciation when the user taps a speaker icon.

Hancom’s goal is to provide the free service to the 50,000 athletes and officials coming from over 90 countries as well as 20,000 Korean volunteers.

Naver, operator of the country’s most popular search engine, started running beta tests for its translation app Papago in August 2016 and officially released it last July.

The Korean tech company has combined rule-based machine translation, the oldest form of translation technology, with newer ones like statistical machine translation (SMT) and NMT to improve accuracy. The app, for example, can evaluate a whole sentence to determine the contextual meaning of the Korean word achim, which can mean either morning or breakfast depending on its use.

Naver has a large treasure trove of textual data from its local search engine as well as global services like web comics. In Asia, for instance, it has been translating web comics into multiple languages using professional translators.

Access to this pool of data allows Papago to understand colloquial expressions used in daily life and keeps it up-to-date with the latest slang.

Like GenieTalk, Papago can also translate via text, voice and image. One of the strong points over GenieTalk is Papago’s image translation. While GenieTalk translates all text in a picture, Papago allows the user to highlight certain parts of the image’s text so that only some of it is translated.

Also similar to GenieTalk, Papago has a list of common phrases used in everyday situations like buying a ticket or paying a bill. The phrases, too, are pronounced when tapping on a speaker icon.

An app that needs no introduction is Google Translate, which has more than five million downloads on Android alone, making it the most popular translation app in the world. Papago has over 18,000 downloads while GenieTalk has 2,500 on Android.

The Google app has the advantage of providing the most languages, at 90.

One distinctive feature of Google Translate is its ability to read text that is scribbled onto the phone with one’s finger, especially useful if a traveler does not know how to type in Korean. Users can simply write Korean text with their fingers, and the app will try to correct the scribble and then translate.

The image analysis feature on Google Translate is similar to Papago’s in that users can highlight parts of the image that they want to translate.

Although Google Translate offers the most languages, their accuracy varies and especially lags behind GenieTalk and Papago in Korean.

This app developed by Samsung is useful for getting information about the Games, including on schedules, ticketing and venues. It also provides information on cultural programs and nearby tourist destinations.

Directions, though, are more difficult to find than on Go PyeongChang, which was specifically designed for navigation.

The app is only available in Chinese, English, French, Japanese and Korean.

This app developed by KT is most convenient for navigating to and within the Olympic site. It comes in Chinese, English, Japanese and Korean.

The app opens with a map of Pyeongchang County, Gangwon, and asks for your current location and intended destination. It then offers three options: public transportation, personal vehicle and taxi.

The information it provides includes the time it takes to get to the destination and how much it will cost. If the distance is close, it will offer directions on foot.