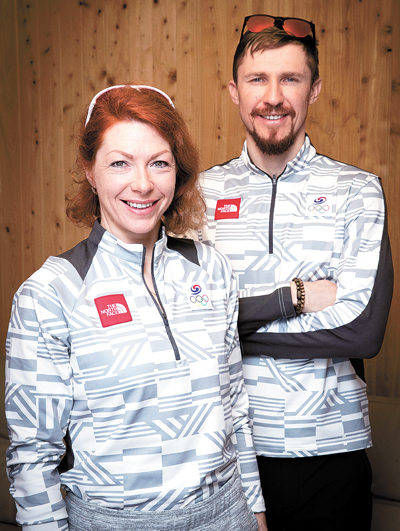 While the extreme cold in Pyeongchang, Gangwon, is a concern for both athletes and spectators, Korean biathletes Anna Frolina and Timofei Lapshin don’t seem particularly phased.

“Pyeongchang is cold?” Lapshin said. “I went home to Russia a week ago and it was negative 50 degrees [Celsius].”

Biathlon, like all snow events, takes place outdoors, but the freezing temperatures don’t normally bother the athletes as they are kept moving throughout the skiing and shooting contest.

“The wind is pretty strong, but this cold is not a problem,” said Frolina.

Frolina and Lapshin were both born and raised in Siberia, Russia, but will be representing Korea at the 2018 PyeongChang Winter Olympics. The two, both in their 30s, are looking forward to their first Winter Olympics competing for Korea rather than Russia. Under the special naturalization program, Frolina was granted a Korean passport in March 2016, while Lapshin got his in February 2017.

Having skipped the Sochi Olympics, this will be Frolina’s first Games in eight years since the 2010 Vancouver Winter Olympics. At the Vancouver Games, Frolina, competing for Russia at the time, finished fourth in the women’s 7.5-kilometer sprint.

PyeongChang is especially exciting for Lapshin as this will be his first Winter Olympics despite competing for Russia on the international stage for eight years and winning six International Biathlon Union (IBU) World Cup races.

“I am very proud to be competing at the Olympics representing the host country,” said Lapshin.

Frolina also showed her pride in representing Korea, “It’s the Olympics held at my home. I have to do well.”

Korea has never won an Olympic medal in biathlon. However, based on recent results, the Korea Biathlon Union (KBU) is hoping to see the country’s first medal in the sport. Frolina finished 8th in the fourth International Biathlon Union (IBU) World Cup race on Jan. 6 and sixth at the European Championship in the women’s 7.5 kilometers sprint on Jan. 27.

Lapshin, who started competing for Korea this season, recovered from a surgery on his left knee in May. In December, he finished eighth at the third IBU World Cup race in the men’s sprint.

Since biathlon requires athletes to be able to ski and shoot a rifle, rankings can change quickly as even the smallest mistake in either discipline can disrupt the entire race.

“Anyone who finishes inside the top 10 at the IBU World Cup race can change their ranking at the Olympics,” said Kim Jong-min, vice president of the KBU who helped Lapshin and Frolina in their naturalization process. “In addition to Lapshin and Frolina’s experience in Russia, having the home advantage will possibly allow them to medal at the PyeongChang Olympics.”

Both Frolina and Lapshin fell out with the Russia’s biathlon authority prior to moving to Korea. Frolina was left behind after she gave birth in 2013, while Lapshin struggled to fit in among the cliques of powerful athletes. Just as they found out that they would have no chance at competing in Pyeongchang, Kim suggested naturalization.

“I won the pursuit race at the 2009 World Championship in Pyeongchang and I think there was a revelation that I should compete for Korea,” said Frolina. “I got to dream of my future and have seen improvements in a short period of time from the great help I received.”

Having practiced the Korean national anthem at every opportunity since moving to Korea, Frolina’s dream of competing at the PyeongChang Olympics will finally come true.

“I’m ready to win a gold and sing the national anthem,” Frolina said.

Due to the high number of naturalized athletes competing for Korea this year, a lot of fans have mentioned concerns that, after the Games, athletes may head back to their former countries.

Frolina and Lapshin made it clear that this won’t happen.

“Victor An is now a hero in Russia,” said Lapshin. “After this Olympics, I want to compete in two more Winter Olympics. So I want to contribute more to Korean biathlon and, in the future, I want to open a biathlon school in Korea for younger biathletes.”

Like Lapshin, Frolina also hopes to stay in Korea after the Games. Though they spend more than half a year in foreign countries to compete in international events and for offseason training, both biathletes have focused on learning Korean to communicate with their teammates and coaching staff.

“Biathlon is the most popular winter sport in Russia,” said Lapshin. “If anything - weather, wind, ski conditions - doesn’t fall in your favor, you can’t win. I hope the fans pay more attention to this unpredictable sport.”

“You can’t tell as who will win based on one shot,” Frolina said. “I’ll continue to work hard until biathlon becomes Korea’s most popular winter sport.”