Thanks to recent security measures by the PyeongChang Organizing Committee, these Olympic Games might just have the cleanest doping record in history. 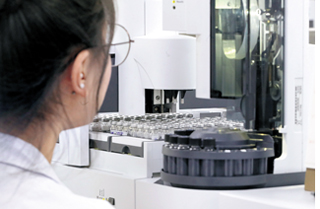 At the Seoul Summer Olympics 30 years ago, Canadian sprinter Ben Johnson won gold, breaking the world record by clocking 9.79 seconds in the men’s 100-meter final relay. But four days later, the Korea Institute of Science and Technology (KIST) shook the international community by detecting his use of illegally obtained steroids, disgracing the sprinter.

KIST is once again tasked with carrying out doping tests for the PyeongChang Games, just as it did during the 1988 Seoul Olympics.

But their job is not an easy one. As sports competition gets fiercer, the list of drugs prohibited by the International Olympic Committee (IOC) gets longer. During the Seoul Olympics, only some 40 drugs were banned. Now that figure has risen to over 400.

With the increase in the number of prohibited drugs, security measures are also becoming stricter and more elaborate.

Russia has been in the spotlight for its systemic violation of anti-doping regulations at the 2014 Sochi Olympics and is now barred from being represented at PyeongChang, which is the first IOC sports event after it issued its “Fight against Doping” statement last March. Naturally, stronger security precautions will be taken.

More than 16,000 pre-game doping tests targeting the top-20 athletes in each sport category have been carried out from last April to Jan. 31, according to Richard Budgett, the Medical and Scientific Director of the IOC.

“The work of the pre-games testing task force is now officially finished,” Budgett said during an interview on Feb. 3. “But the [Doping-Free Sport Unit] DFSU, they were the secretariat. They’ve been looking at all the athletes. They know exactly who’s been tested and how much. So that works very nicely to decide who to test when and where at the Games.”

To that end, KIST, the Korea Anti-Doping Agency (KADA) and the PyeongChang Organizing Committee will work together to run a total of 2,500 doping tests - 700 blood tests and 1,800 urine tests - during the Olympics.

The PyeongChang Organizing Committee will be in charge of gathering samples from athletes and numbering the B sample bottles and A sample bottles. The BEREG-KIT Geneva security bottles, which use a special security closure system and were implemented at the 2016 Rio Olympics, will also be used at PyeongChang with about 1,000 employees from professional doping inspection organizations to be deployed for collecting samples.

As for the transportation of the bottles, Korean soldiers will be in charge of guarding and moving the samples to KIST’s Doping Control Center in Seungbuk District, northern Seoul. One soldier will be assigned to drive the vehicle while another will be tasked with guarding the samples.

But it doesn’t stop there.

To monitor the vehicle, tracking devices will be installed for additional security.

Once they are transferred to the center, KIST will analyze the samples using 158 analysts on rotating shifts three times every 24 hours. Upon arrival, A sample bottles will be analyzed immediately, whereas B bottles will be stored in the freezer and later compared to the A samples in the case of a positive test ? if the second sample fails to confirm it, false positives can therefore be avoided.

KIST will also be surveilled 24 hours a day by CCTV to prevent the tampering of samples.

Security at the lab will also be top-notch.

To enter the lab, two people must scan their fingerprints at the same time, and they will only be permitted to stay for 10 minutes. Guards from the World Anti-Doping Agency (WADA) will be used to monitor the entire process.

“We will cooperate with agencies working with IOC and carry out the tests with the upmost security to prevent blood doping and other doping schemes,” said Seo Min-jung, head of the doping control team for the PyeongChang Organizing Committee. “PyeongChang will have the cleanest record.”