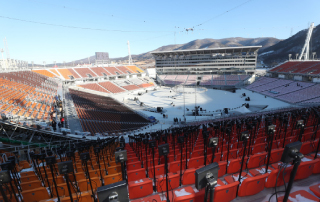 As the PyeongChang Winter Olympics opens on Feb. 9, many are concerned about the cold weather for the opening ceremony. Those who attended the rehearsal on Feb. 3 said that the cold was on a different level, and the organizing committee is working hard to make sure spectators are kept warm. This is all because of the lack of a roof at the Olympic Plaza in Pyeongchang, Gangwon, where the opening and closing ceremonies are held. Why did they make a stadium without a roof?

The primary reason was the budget. The Olympic Plaza is a temporary structure that will be deconstructed after the Olympics. The county, with a population of 40,000, would not be able to manage and utilize the facility. While the roof was eliminated to minimize construction costs, some pointed out that the plan to build a temporary structure that costs 100 billion won ($92.1 million) was a waste of money. The plan to build a proper venue for the opening and closing ceremonies in Gangneung was considered after IOC President Thomas Bach announced that multiple cities could host the Olympics in 2014. However, in December 2014, former President Park Geun-hye unilaterally declared that the Olympics would not be shared with another city, and further discussion was stopped.

The need for a roof at the venue was constantly raised until construction began in 2016. Representative of Pyeongchang and lawmaker Yeom Dong-yeol said that, as someone who grew up in Daegwallyeong, an outdoor opening ceremony on a winter night is inconceivable. However, other lawmakers treated him as if he was greedy and trying to get more money for his constituency.

Architect Ryu Choon-soo, who designed the Seoul World Cup Stadium, was asked by the PyeongChang Olympics Organizing Committee in 2014 to advise on the basic design. While he suggested that a roof was necessary, nothing happened. He completed a concept design for a venue with a roof that cost less than the organizing committee’s original plan and appeared at the National Assembly to testify, but no lawmaker paid attention.

The seriousness of the opening and closing ceremony venue without a roof was acknowledged after the new administration was established last year. Second Vice Minister of Culture and Tourism Roh Tae-kang said, “I suggested putting a roof over, but gave up because it would require reinforcing the structure to bear the weight. A plan to add heated seats was also considered, but it was beyond the capacity of the substation in Pyeongchang.”

In the end, 40,000 spectators will face the cold with windbreakers, heating pads, rain ponchos and blankets. There should be an investigation to find out who is responsible for this mistake.

*The author is a deputy editor of the art team.