A drama-filled day without breaking the bank : Seoul’s performing arts hub Daehangno, known for its theaters, is also home to delicious eateries and breathtaking views

A drama-filled day without breaking the bank : Seoul’s performing arts hub Daehangno, known for its theaters, is also home to delicious eateries and breathtaking views 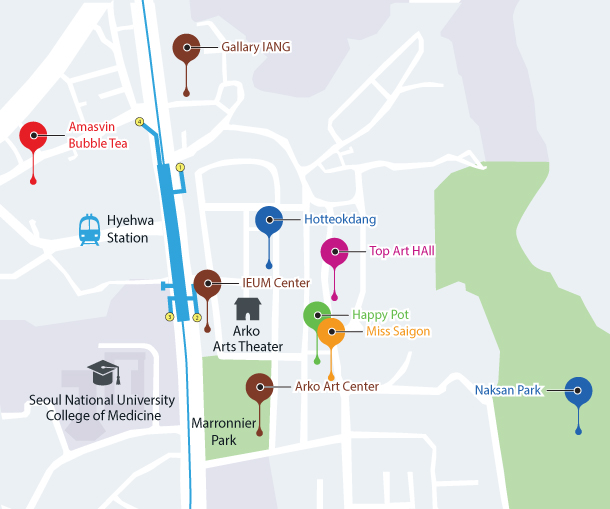 Seoul’s hub of performing arts, Daehangno, is home to many actors and theater lovers. The central Seoul neighborhood is packed with 30 large and small theaters that line the streets, each offering a different tale to enjoy.

Great eateries and cafes with affordable prices fill the streets, making this region even more attractive for those looking to make a day out of a visit to the theater district. While the streets are crowded with theatergoers, actors and crew members mingling before shows start, a 15-minute walk from the center of the district takes visitors to the peaceful Naksan Park, which offers one of the city’s most spectacular views.

At the end of the day, this reporter, who calls herself a gourmand, was satisfied after eating a lunch, a snack, a dinner and a cup of bubble tea - all of which she enjoyed for a total of 12,600 won ($11.61).

Throughout the day, she enjoyed both a visit to a gallery and a play, which only set her back 9,000 won.

The first place this reporter visited was Vietnamese restaurant Miss Saigon, to fill up her stomach before doing anything else. The eatery is located about 250 meters (0.15 of a mile) away from Hyehwa Station, exit 2.

Forget the dishes that cost 8,000 won or more, because each of the four main dishes - beef pho, chicken pho, saigon fried pho, or saigon fried rice - is less than 4,000 won. A bowl of beef pho offered the perfect amount of flavor and quality to soothe any rumbling stomach.

The secret behind the cheap menu is that the restaurant operates on a self-service system. You order the food at a touch-screen, self-service kiosk that accepts both cash and cards. When the chef calls out your number, you need to pick up the dish yourself. And when you are finished, returning the dishes is your responsibility as well.

After finishing up a bowl of noodles, this reporter headed towards Gallery IANG to help burn some calories. Located a little farther than the main streets of Daehangno, the gallery is one of the 10 or so museums in the neighborhood. What makes it worth the walk is the free admission.

Less than 10 minutes away from the restaurant, in the basement underneath a Lotte Mart is Gallery IANG. When this reporter visited on Feb. 2, two exhibitions were ongoing. In Hall 3 were artworks revolving around the theme of radical feminism, under the title “Full Fist Feminist.”

Of the many paintings, photographs and objects on display, the most astonishing piece was a painting depicting the “free-bleeding movement” (a movement where women let their period blood flow without the use of any fluid-barrier objects such as tampons or pads). The overall atmosphere of the piece was rather terrifying, with the women’s faces hidden in darkness and the bottoms of their bodies covered in blood.

After taking a look around Gallery IANG, this reporter headed to another gallery, the IEUM Center, another place that offers free exhibitions. The gallery usually offers three exhibitions each month.

A few steps from IEUM Center is a famous gallery, the Arko Art Center. The prominent architect Kim Swoo-geun built the gallery in 1979, and ever since, the red brick building has been a symbol of Daehangno.

However, the center doesn’t offer any exhibitions at the moment. The next exhibition, “The Korean Pavilion of the Venice Architecture Biennale” is scheduled to kick off on March 18.

To ease the disappointment after stopping by empty art houses, this reporter continued on to the Top Art Hall to watch a play. The theater is located across the street from the Miss Saigon location.

On the way to the Hall, she bought a ticket for 9,000 won from the booths that are located in Marronier Park. Ticket booths are available in several spots in the streets of Daehangno, and some of the tickets salespeople can be found near exit 1 or 2 of Hyehwa Station. Tickets are also available online at Interpark Ticket.

This reporter watched the play “Secret,” which has been one of the most popular productions in the area since it debuted in January 2009. The play revolves around two patients, Lee Gwang-nam and Jang Seong-nam, a nurse named Jin Seon-mi and a doctor named Seo In-young, who are all at a psychiatric hospital. Although it is clear that Lee and Jang need regular medical treatments due to their illness, the reason why they are suffering is not revealed until the end. The secret behind their illness referred to in the title of the show is finally divulged in the last scene.

The play is unique in that it includes members of the audience and makes them characters in the show, who will leave the theater thinking about what values are most important to them.

After the play ended, this reporter felt a bit empty and walked around to find something to eat. On the corner of the street, a long line caught her eye. It turned out that the people were waiting to get hotteok, Korean-style fried pancakes filled with honey and nuts, at a small shop called Hotteokdang.

A thick and round hotteok costs 1,000 won and those who want a cup of tea or coffee can pay an extra 1,500 won. Together, it makes for a warm snack on a cold day.

After that, in order to check out the sunset at the top of Naksan Park, head up the street to find the entrance of the park. Because the park is located on a mountain, those who wish to see the quality view should be prepared to climb up a pretty steep set of stairs.

The top of Naksan Park offers a magnificent panoramic view of the city, complete with a clear view of N Seoul Tower in the west, where the sun sets.

For those who use Instagram, this park is a good spot for a photo, as it is where old and modern parts of the city coexist. On the way up to the top of the mountain, one can see the old fortress wall that makes up a portion of Hanyangdoseong, or the Seoul City Wall. It was built during the Joseon Dynasty (1392-1910) to protect the city from invasion. The wall can also be seen in four other places in central Seoul - Baekak, Heunginjimun, Namsan and Sungnyemun.

The park is also a favorite place for drama producers to film scenes of a couple while out on a date. Check out the MBC drama “Angry Mom” (2015) and the SBS TV series “The Girl Who Sees Smells” (2015) to catch beautiful scenes capturing a night view of the park.

For dinner, head back down to Miss Saigon and look for Chaesundang Happy Pot, which is nearby. The restaurant offers warm gamasotbap, rice cooked in an iron cauldron, for a reasonable price.

The cheapest items on the menu are sundubu jjigae (soft tofu stew) and tuna kimchi jjigae, which cost 4,900 won each. The price includes a warm Solomon’s Seal Tea and unlimited banchan, the small side dishes that are commonly served during traditional Korean meals. After finishing up the rice from the gamasot, pour the tea into the bowl to make sungnyung, a traditional Korean desert made from boiled scorched rice.

Just like the Vietnamese restaurant, this eatery runs on a self-service system.

Located a 10-minute walk from Happy Pot is Amasvin, a bubble tea franchise by exit 4 of Hyehwa Station. Although there are not many seats available in the store, many people stop by and grab a drink to take with them.

A favorite is the kiwi-blended bubble tea that costs just 2,800 won. Even as the cheapest beverage on the menu, the store blends in actual kiwis along with additional syrup, creating a fresh fruit juice.

For those who love coffee, the shop sells Americanos and lattes in addition to other hot beverages.