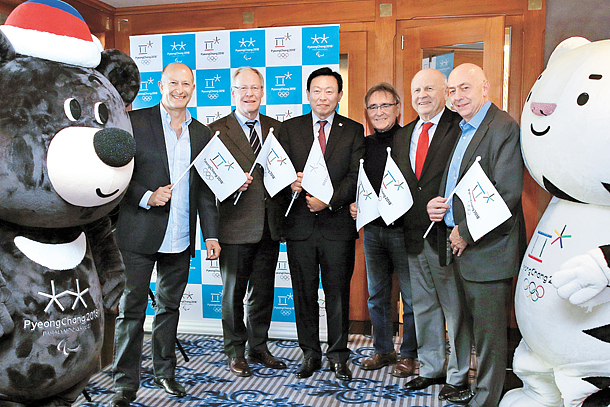 Shin Dong-bin, chairman of Lotte Group, third from the left, meets with members of the International Ski Federation’s executive committee to discuss preparations for the PyeongChang Winter Olympics on Jan. 17. [LOTTE GROUP]

Lotte is an official partner of the 2018 PyeongChang Winter Olympics and actively supporting the Korea Ski Association to win the country’s first Olympic medal in snow sports.

As a leader in retail and distribution, Lotte is responsible for selling official Olympic merchandise. The company is operating Olympic shops at its duty-free stores, supermarkets and convenience stores at stadiums, airports and major railway stations. There is also an official Olympic shop at 50 Lotte Department Store locations nationwide.

Lotte has come up with 850 products using the Olympic emblem and mascots to suit the tastes of foreign visitors. Some of the best-selling products include sneakers, dolls, mugs, tumblers, T-shirts, eco-bags and pouches.

The PyeongChang padded coat designed by the Olympic licensing team at Lotte Department Store has especially been popular, with some people lining up overnight to purchase the jacket. 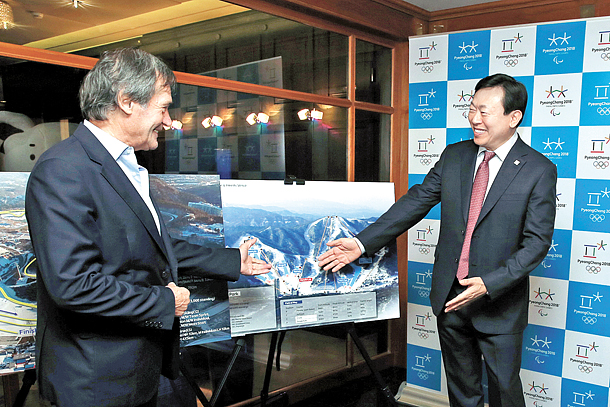 Shin Dong-bin as head of the Korea Ski Association delivers a briefi ng on preparations for the PyeongChang Winter Olympics to Flavio Roda, president of the Italian Winter Sports Federation. [LOTTE GROUP]

Together with the organizing committee, Lotte Deparment Store and Lotte Duty Free have turned the entire Jamsil area into a promotional zone for the Winter Olympics and carried out various activities to generate excitement for the Games.

The LED torch, consisting of 26,000 lights, will remain lit at Lotte World Tower until the end of the Olympics. Images from the Games will grace the walls of 50 Lotte Department Stores, where more than 120,000 people are expected to visit per day. 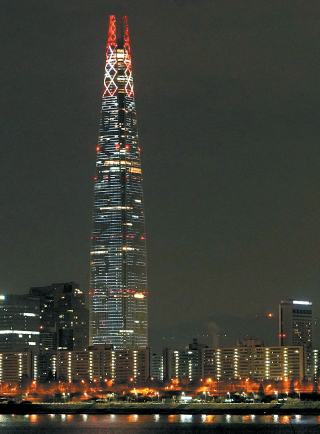 An LED torch will line the facade of the 123-story Lotte World Tower over the duration of the Olympics. [LOTTE GROUP]

Aside from marketing support, Lotte has been a longtime advocate for skiing as a sport in Korea.

In 2014, Shin was named head of the Korea Ski Association and has committed 10 billion won ($9.2 million) toward the improvement of national athletes through 2020.

To help Korean skiers improve their skills, Shin paved the way for an exchange of technology and information with ski associations in Canada, Finland and the United States, all high-ranking countries in skiing.

To boost team morale, the association has offered rewards to Olympic medalists and is the first sports organization to give accolades to those who finish fourth to sixth.

In the three years since Shin’s inauguration, the Korea Ski Association has increased the number of leaders in the sport, expanded field training overseas and enhanced incentives for athletes.

“Thanks to active support from Chairman Shin Dong-bin, we are writing a new chapter in the country’s history of skiing,” an official at the Korea Ski Association said. “The possibility of winning our first medal in skiing, once considered nil, is increasing.”

Shin was the first corporate leaders to carry the torch during the relay. On Jan. 14, he ran about 200 meters (660 feet) from the intersection at Jamsil Station to Gangnam District, carrying the Olympic flame and wishing his best for a successful Winter Games and Korea’s first medal in skiing.

Before that, on Nov. 18, 2017, he attended the International Ski Federation’s executive committee meeting and briefed them on preparations for the Olympics, including facility conditions and plans to deal with traffic and weather.

“With our numerous safety training, the Olympics will be a ‘Peace Olympics,’” he told the committee, which includes Gian Franco Kasper, president of the International Ski Federation; Sarah Lewis, the secretary general; and 16 other members.

“Your beads of sweat will bring great joy to the people next year,” he told athletes. “I believe the miracle of winning our first medal in skiing will happen.”

He also promised them his utmost support to boost morale.

Despite his busy schedule, Shin has participated in most Olympic events, including going to test events, watching games until late into the night and attending awards ceremonies. He has also been examining preparations for the Games and encouraging athletes.

In June 2016, Shin attended the 50th conference of the International Ski Federation in Cancún, Mexico. As an executive committee member of the sport’s top governing body, the Lotte chairman is putting great effort toward strengthening the competitiveness of Korean skiing and promoting the PyeongChang Winter Olympics.