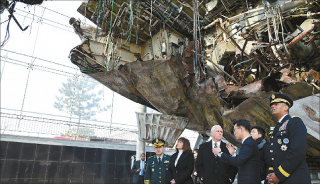 U.S. Vice President Mike Pence on Friday met a group of North Korean defectors in an apparent effort to highlight the brutality of the repressive regime and abject human rights conditions in the reclusive state.

Pence also reaffirmed that the United States and South Korea remain aligned in their approach toward the North, saying that there is “no daylight” between the allies and urging Pyongyang to “permanently” abandon its nuclear aspirations. Leading a delegation for the PyeongChang Winter Olympics, Pence arrived in South Korea on Thursday. He earlier met with South Korean President Moon Jae-in. On his second day here, Pence toured the country’s Navy 2nd Fleet Command in Pyeongtaek, about 70 kilometers (43.5 miles) south of Seoul, where he met with four North Korean defectors and heard about their harrowing experiences in the North and the hardships they had to endure to pursue freedom, according to foreign ministry pool reports.

“We are grateful for your courage,” Pence told the defectors at the start of the meeting. “The cruel dictatorship of North Korea is little more than a prison state. As people testified, it is a regime that imprisons, tortures and impoverishes its citizens and I can assure your witness of that truth will be heard across the world,” he said.

Pence is accompanied by the father of Otto Warmbier, the U.S. college student who was detained in North Korea and died shortly after being sent home in a coma last year. He also joined the meeting with the defectors. Pence used his trip to South Korea to highlight the danger, brutality and rights abuses of Pyongyang as he seeks to tackle its Olympic charm offensive, which is seen as being aimed at weakening international sanctions against it. He paid tribute to victims of two rounds of inter-Korean maritime skirmishes in 1999 and 2002 at a memorial at the command. He later moved to visit another memorial, where the wreckage of a South Korean warship torpedoed by North Korea is displayed.

In March 2010, the North’s attack sunk the Cheonan warship near the Northern Limit Line, a de facto maritime border off the country’s west coast, killing 46 sailors on board.

In front of the memorial, he urged Pyongyang to “permanently” abandon its nuclear ambitions.

“The simple truth is ... the time has come for North Korea to permanently abandon its nuclear and ballistic missile ambitions, to recognize there is no future as a member of the family of nations for a nuclear-empowered North Korea,” Pence said, according to White House pool reports.