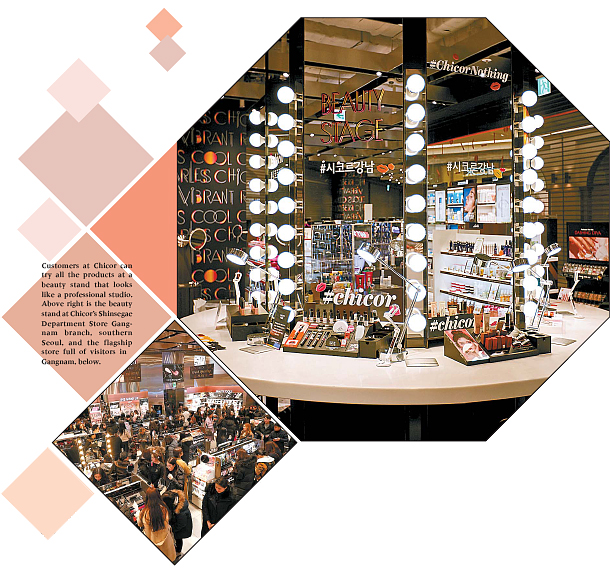 There are countless motives for stepping into a health and beauty store, including the vaguest: to see what’s new or hot, trying a product or two, checking out the sales. In that situation it can get incredibly awkward when a staffer approaches with a long-winded explanation about how great a product is when the shopper has no interest in that product - and no interest in actually buying anything. 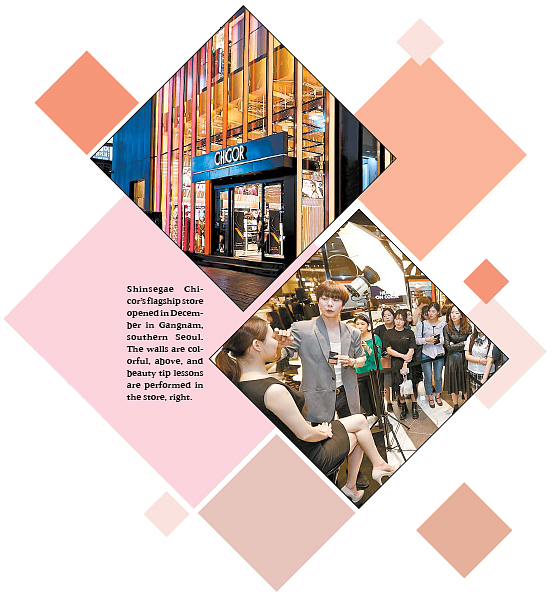 At the Chicor flagship store near Gangnam Station, southern Seoul, and the Olive Young Gangnam store nearby, almost all the products on display can be tested, and the shops even offer beauty studios, where the products can be experienced to the fullest from lipsticks to lotions and creams. These stores even have washing stations where customers can try out cleansers and body wash products.

Chicor is a multi-brand cosmetics company run by Shinsegae, which opened its first store in December 2016 in the Shinsegae Daegu Department store. More branches were opened later in Busan, Gwangju and finally Seoul. The flagship store opened on Dec. 22 in downtown Gangnam. The store offers customers a chance to try out all products from a total of 250 brands, including luxury brands that used to be only found in department stores including NARS, Bobby Brown, MAC and Shu Uemura. They occupy the store’s first floor. In the middle of the floor is the so-called “beauty stage”: mirrors with lights as in a theater dressing room equipped with different products for trial. It looks like a professional makeup artist’s studio.

On the basement level, visitors can pay to have professionals do their hair and makeup. In one corner of the basement is a stage where the store holds performances and beauty tip lessons. The second floor has flat irons for hair straightening that can be used by customers and digital kiosks that give information on products for sale. 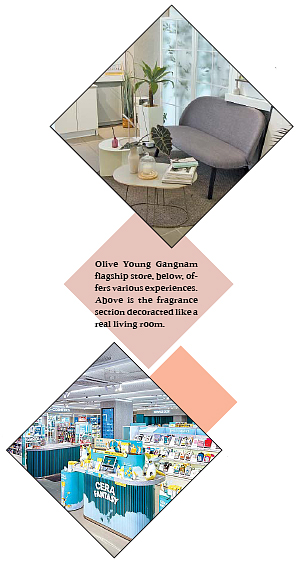 Olive Young, a health and beauty store owned by CJ Group, opened a Gangnam branch near Chicor last September with hands-on attractions seen in none of its other branches. The first floor has the usual cosmetics zone, and in the middle is a makeup studio and a digital kiosk that gives information about different products. The real fun is on the second floor, where visitors can get their skin tested by professionals and receive free gifts after they get a better understanding of their own bodies. The fragrance diffuser section is decorated to look like an actual living room for curious customers to sit inside.

According to a recent report by mobile research platform Open Survey, “Beauty Trend Report 2018” released on Jan. 22, women aged from 20 to 49 chose multi-brand health and beauty shops such as Olive Young to go shopping for cosmetics and skin care products, and 49.5 percent of people “made decisions based on product reviews on blogs and internet posts.”

This trend has led to the so-called “Untact” marketing strategy in the industry. Shops are now minimizing contact between customers and employees. The untact strategy advises clerks to stay away from customers unless they are specifically called for. This has been chosen as one of the important trends of 2018 by numerous researchers, including some at Seoul National University.

“People tend to feel that such contact is exhausting, and prefer to stay in touch with abundant sources of information on social media,” said Kim Nan-do, a professor of consumer science at Seoul National University. 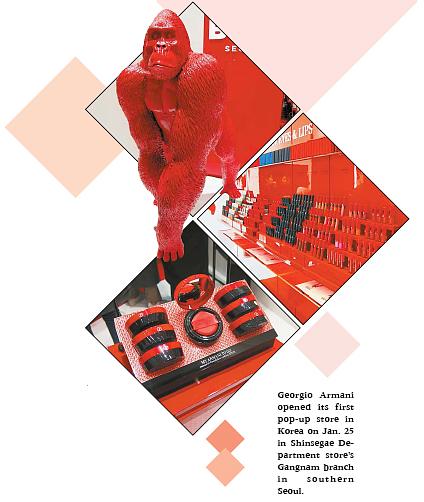 Other health and beauty shops have picked up on that trend, including Armani Box Seoul, a Georgio Armani pop-up store that opened in Shinsegae Gangnam Department store on Jan. 25.

This is the first time for the Italian luxury house to open a pop-up store in Seoul, and the seventh time in the world after London, Paris, Hong Kong, Tokyo, Beijing and New York. The brand only runs a single pop-up store at a time.

Inside the store are all of Armani’s famous cosmetic products, including the Black Cushion foundation, as well as a figure of Uri the Red Gorilla, the Armani icon that travels around the world with the pop-up stores. But other than just an array of testers, the shop offers services such as the “self bar” where visitors can put makeup on themselves or on digital images of models on the shop’s tablet computers.

The Armani Box pop-up store will run until March. Subsequently, the company will open Armani Light Box, “a new beauty studio like never before,” according to Armani.