A hypocrite on human rights

A hypocrite on human rights 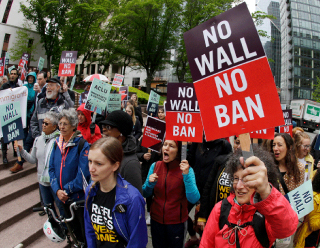 Simsbury, Connecticut, is an affluent town not far from New York City. The average household income there is $160,000, and of the population of 23,000, 95.3 percent is white. Huang Zhelong, 47, and Li Jinxiang, 42, run a nail salon in Simsbury, where they have raised two U.S.-born sons.

Huang and Li are Korean by ethnicity, Chinese by nationality and Americans by circumstance. They moved to New York City in 1999 from Jilin Province, China, seeking a better life and stayed in the United States since.

Recently, they were informed by Immigration and Customs Enforcement that they had to leave the country.

Huang and Li were ordered to leave five years ago, but their deportation order was stayed under Obama. But now, the order is being carried out as the Trump administration is strictly enforcing immigration policies.

The couple had applied for permanent residency, but their application was rejected. They are scheduled to leave on a one-way ticket to China on Feb. 16.

“We have been here for 20 years,” Li told the local NBC outlet. “We pay taxes and have never committed a crime. We are Americans, and now they are telling us to get out.”

The couple’s biggest concern is their two sons, who have never been to China and speak little Chinese. The family is about to be torn apart.

When Eric Wellman, first selectman in Simsbury, first learned of the story, he said, “When I think about what our national leaders talk about — standing for family values, standing for small local businesses — those values are so disconnected from our national immigration policy.”

Today, families across the United States are being separated by ICE. This is the realty in a country where freedom is considered the highest value. In many cases, not just criminals but law-abiding undocumented immigrants are being deported.

Syed Ahmed Jamal, 55, came to the United States from Bangladesh 30 years ago. On Jan. 24, the chemistry instructor at Park University in Kansas City, Missouri, was handcuffed and arrested on his front lawn, right within sight of his three children. He faces the possibility of deportation.

In late 2017, the United Nations General Assembly adopted a resolution on North Korean Human rights for the 13th time in a row in which it stated once again that separated families should be unified. There is no doubt that the value of family is an immutable human right.

Trump will likely use North Korea’s record on human rights as a card to pressure Pyongyang. After his State of the Union address last month, he invited North Korean defectors to the White House to speak on the issue.

But I want to ask him if he is really qualified to discuss human rights when his immigration policy separates so many families and causes such great pain to so many immigrants in the United States.

*The author is the New York correspondent for the JoongAng Ilbo.