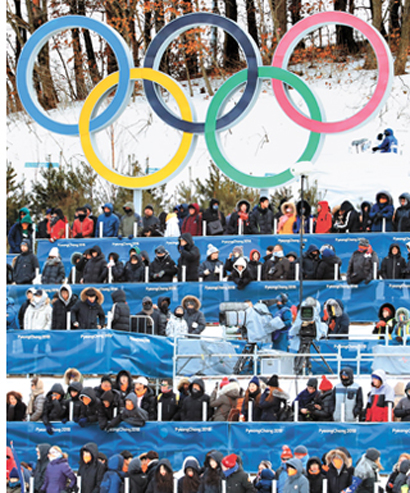 Spectators bundle up to watch the men’s 15 kilometers and 15 kilometers skiathlon at Alpensia Cross-Country Skiing Centre in Pyeongchang, Gangwon, on Sunday. Harsh weather conditions in Pyeongchang has already led to rescheduling in snowboarding and alpine skiing events. [YONHAP]

Cancellations started early Sunday morning before the men’s downhill final for alpine ski was set to take place at 11 a.m. After being notified that high winds were expected to reach up to 20 meters per second (45 miles per hour) at the time of the event, with an average wind speed of 6 to 8 meters per second near Jeongseon Alpine Centre, the International Ski Federation decided to move the event to Thursday at 11 a.m.

Around 3 to 4 meters per second of wind speed is considered safe for athletes to ski in.

“When I went to the starting point for a test run at dawn on [Feb.] 11,” said Byun Jong-moon, head of the alpine ski department under the Sports Bureau for the PyeongChang Organizing Committee, “the wind speed blew at 17 to 20 meters per second and I saw the gondolas swinging furiously.” 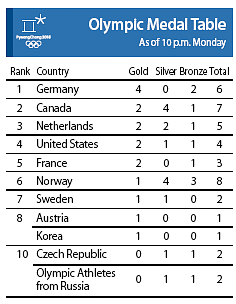 Organizers were further convinced to reschedule both the men’s downhill and super-G for Thursday and Friday respectively, when weather reports from the Korea Meteorological Administration stated that winds would only get stronger throughout the day.

They believed it would be dangerous for athletes to take the lifts up the slopes with wind levels reaching such high numbers and would negatively impact downhill skiers, as the smallest changes in weather could greatly affect the outcome of the games. High wind speed could make the skiers go down dangerously faster than normal.

“Wind greatly affects alpine sports, especially downhill and super-G,” said Byun. “Though no official guidelines exist for cancellations or postponements if wind speed exceeds certain meters per second, we seriously consider changes in wind or [other] weather forecasts in our decision.”

The women’s giant slalom for skiing scheduled for Monday at Yongpyong Alpine Centre in Pyeongchang, at 10:15 a.m., was also postponed due to high winds and freezing temperatures. In the latest weather forecast, temperatures at the center were expected to plummet to negative 20 degrees Celsius, with wind speeds reaching 4 meters per second as of 9 a.m.

Sung Baik-you, spokesperson of the PyeongChang Organizing Committee, said the safety of athletes was the biggest factor in the rescheduling. Baik explained that wind predictions can be made only up to three days but assured that the event should go forward smoothly given sufficient reserve days allotted by the committee and the International Olympic Committee.

The first run for the event is rescheduled for 9:30 a.m. Thursday, with the second run slated for 1:15 p.m. on the same day.

Snowboarding events were also affected by the weather. Ladies’ slopestyle qualification runs for snowboarding were scheduled to take place Sunday afternoon after the men’s. But with high winds, organizers decided to cancel qualification runs altogether and move directly to the start of the finals on Monday.

The first final run was delayed an hour at Pyeongchang’s Phoenix Snow Park, where the event was held.

Due to strong cross-winds only five of the 25 players who attempted a run made it down the slope without a fall during the first run. The third final run was cancelled with winners decided at the second run.

Still, some athletes are responding positively to the organizers’ decision to cancel the events, expressing their thoughts on social media.

“Downhill cancelled due to strong winds. It’s imperative with fair conditions and I applaud the decision. Thanks @fisalpine @Olympics” Norwegian alpine racer Kjetil Jansrud, who is the most-likely candidate to win gold, posted on Twitter.

Aside from wind speed, future games taking place in outside venues could be affected by other conditions including snowfall, rainfall and visibility. Events may be cancelled if snowfall reaches more than 30 centimeters within 24 hours; rainfall is over 15 millimeter per six hours; and visibility of less than 200 meters due to fog or mist.