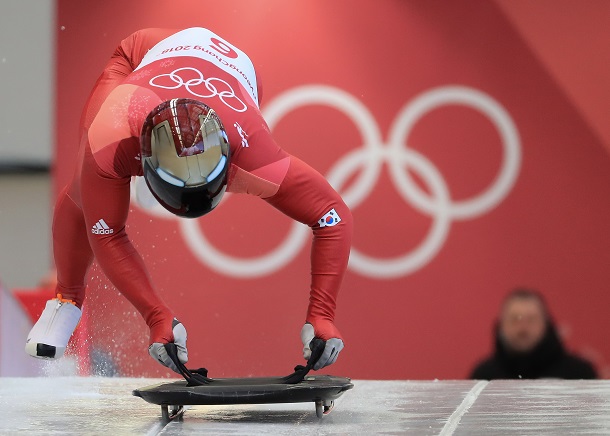 Yun Sung-bin starts his race at the Olympic Sliding Centre in Pyeongchang, Gangwon on Wednesday. [YONHAP]

Yun Sung-bin got off to a flying start at the PyeongChang Olympics, setting a track record in the first two heats of the men’s skeleton at the Olympic Sliding Centre in Pyeongchang, Gangwon on Thursday.

Racing sixth in the first run, the world No. 1 recorded a time of 50.28, beating the track record set by Martins Dukurs of Latvia a year ago.
Yun broke his own track record in the second heat, recording a time of 50.07. As well as setting a new track record, Yun also set a new start record — 4.61.

He finished the two heats ranked first with a combined time of 1 minute and 40.35 seconds.

Nikita Tregubov of Olympic Athlete from Russia ended in second with a combined time of 1 minute and 41.09 seconds.

Kim Ji-soo, the other Korean skeleton racer, had an impressive run, ranking sixth after the first two runs with a combined time of 1 minute and 41.66 seconds. Kim will also compete in the next two heats tomorrow.

Holding the lead by 0.74 seconds ahead of Tregubov, Yun will continue his race for gold on Friday morning at 9:30 a.m.
The final standing is determined based on the combined time of all four heats.