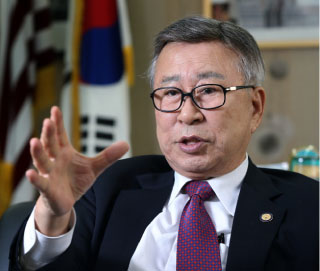 In the 110-year history of Korean immigration in the United States, 79-year-old former Rep. Jay Kim is the first and only Korean-American politician to be elected to Congress. I called Kim after the Lunar New Year, and he recalled his first election 26 years ago.

The opportunity came suddenly in February 1992. Kim was the mayor of Diamond Bar, a city in Los Angeles County, after serving as a CEO at an engineering firm for 20 years. As the population of California was growing, the 41st congressional district that included Diamond Bar was redistricted. While he had only served as a council member and mayor for a year each, he could not pass up the chance to run for a seat in the House of Representatives.

However, mainstream candidates also saw the opportunity and 16 of them, including California assemblyman Chuck Bader and Department of Commerce attorney Jim Lacy, joined the race. In the first opinion poll, local veteran politician Bader got 50 percent support and Lacy got 20 percent, while Kim only got 3 percent. He considered withdrawing, but decided to stick it out.

On April 29, the Los Angeles riots erupted. As many Korean-owned stores were looted and burned down, discord between Koreans and African-Americans was high. It had a critical impact on the election. The situation changed as Koreans were seen protecting the town by themselves even when the authorities could not. Kim was a part of this and was seen as a hero, thus making a name for himself.

His election strategy, to use his business experience to distinguish himself, also worked. At the debate, he said that he did not have accomplishments as a career politician and was not as articulate as a lawyer, but he was an engineer who did not lie. Just as he had operated the city’s finances well and made savings in the bank, he promised to run the government like a company to make sure there was no deficit. In the Republican primary, he defeated other competitors and was nominated as the Republican candidate. In the election in November, he earned 59.6 percent of the votes and became the first Korean-American to be elected to the U.S. House of Representatives. He was reelected in 1994 with 62.1 percent and in 1996 with 58.6 percent and served three terms.

After Kim recounted his story, I asked him if there was a way to make a second Jay Kim in the 2018 midterm election. I was asking about a strategy to move past the current situation, where not a single Korean American has represented the people in Washington for two decades. As 10 Korean-Americans are running, he said, “Elections cannot be won with luck, doctor’s degrees or money.” He also said that the strategy of winning minority votes could not succeed without the support of mainstream voters, who make up 70 percent. Kim said that elections could be won when candidates win white voters’ support and compete against white competitors. He seems to think Korean-American candidates need to stop appealing solely to Koreans to survive.