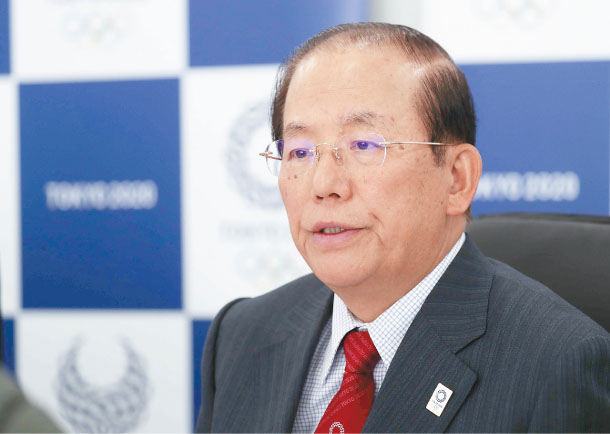 Some 120 organizers for the 2020 Tokyo Olympics are visiting the 2018 PyeongChang Winter Olympics to help them prepare for the Summer Games in just two years. Toshiro Muto, the chief executive officer of the 2020 Tokyo Organizing Committee, flew into Korea before the Olympics kicked off to learn more about how the Olympics works.

Muto was the former deputy governor of the Bank of Japan before becoming the chairman of Daiwa Institute of Research, a research and consulting group in Japan. In 2014, Muto became the CEO for the Tokyo Organizing Committee for the Olympic and Paralympic Games.

Muto shared some of the committee’s plans for the upcoming Tokyo Olympics in an interview at the Main Press Centre in Pyeongchang County, Gangwon, on Feb. 10.

Q. How would you evaluate the preparation and process for the PyeongChang Olympic Winter Games?

A. The first people who approached me as soon as I landed in Korea were the volunteers [also known as the Passion Crew]. I met with the driver and volunteers when I was riding the shuttle bus. They accommodated us very well. I realized then that the role of the volunteers is crucial for the success of the Olympics. A few days ago, I visited the athletes’ village and the Japanese athletes also told me that they felt comfortable staying there. Truthfully, an emergency situation can occur at any time at the Olympics. The PyeongChang Organizing Committee is quick to solve and control these problems.

Are there any difficulties preparing for the Tokyo Olympics, set to take place in two years?

I was appointed CEO of the Tokyo Organizing Committee four years ago. At present, I can say that preparations are going smoothly. First, it seems like the arenas and venues will be built as planned. The International Olympic Committee [IOC] is also giving us a good assessment.

Recently, Thomas Bach, the president of the IOC, emphasized the Olympic Agenda 2020 again. He asked that the host city cut back on the budget. Can you speak on that?

At first, the biggest topic was the cost. Many Japanese citizens were opposed to the hefty cost of the Olympics. That’s why we first focused on an agenda to use existing arenas. There were also requests to increase the number of stands at the new venues, but considering the aftermath of the Games, we decided to reduce the stands. In the midst of all that, the IOC announced Agenda 2020. It reduced our budget by more than 200 million yen [$1.86 million].

The PyeongChang Olympics garnered wider attention with the participation of North Korea and the unified ice hockey team. Does Japan also wish that an inter-Korean team will participate in Tokyo?

I heard that President Bach called the joint entrance of the two Koreas at the opening ceremony and the women’s inter-Korean ice hockey team a “touching moment.” It is only right that we hope for as many nations and athletes to participate in the Olympics. But the IOC makes the final call on who gets to qualify for the Olympics. Also, the qualification process for participating nations and athletes is determined by the standards laid out by the International Sports Federations (IFs). Because there hasn’t been any mention of an inter-Korean team to play at the Tokyo Olympics, I will refrain from commenting further on the issue. We will respect the decisions made by the IOC and the IFs and make plans according to the Olympic Charter.

At the closing ceremony for the 2016 Rio Olympics, Prime Minister Shinzo Abe’s Super Mario costume left quite an impression. Is there a message or anything that Japan would like to relay to the world through the Tokyo Olympics?

There will be four ceremonies including the opening and closing ceremony not only for the Olympics, but also for the Paralympics. “Sport has the power to change the world and our future” is the vision for the Tokyo Olympics. Though we will plan a separate concept for the opening and closing ceremonies, peace will probably be the most important concept.

Baseball will return to the Olympics at Tokyo, but there is also rising concern about the decision to hold the games at Fukushima where the nuclear accident occurred. How would you address this?

I think the greatest concern is about the radioactivity, but it is scientifically proven that the radioactivity levels at Fukushima are the same as any average city in the world. I hope that athletes and spectators can come to the Olympics with ease. The Tokyo Olympics will take place about 10 years since the 2011 earthquake. I think it will be an opportunity to show the world how we overcame the adversity and recovered.

Is there anything you hope from the Korean people in regard to the Tokyo Olympics?

We are running a Tokyo 2020 Japan House at the Gangneung Olympic Park throughout the PyeongChang Olympics. It is a chance for us to show what we have prepared so far for the Tokyo Olympics, so I hope many people will visit. The Olympics will be hosted in Asia three times in a row starting with the PyeongChang Olympics, then the 2020 Tokyo Olympics and the 2022 Beijing Games. I hope the three countries - Korea, China and Japan - will enjoy livelier exchanges through these events.