Hungarian skier is a no-trick pony

Hungarian skier is a no-trick pony

Elizabeth Swaney of Hungary didn’t come close to reaching the final, let alone winning a medal, in the women’s ski halfpipe at Phoenix Park in Pyeongchang County, Gangwon, on Monday. In fact, she didn’t really attempt a single trick. 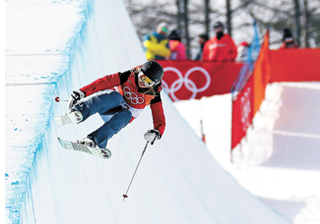 Elizabeth Swaney of Hungary runs the course during the women’s halfpipe qualifying at Phoenix Snow Park in Pyeongchang County, Gangwon, on Monday. [AP/YONHAP]

In a field of 24 skiers, the American-born Hungarian halfpipe skier finished in last place with a score of 31.40 points.

“I didn’t qualify for the finals, so I’m really disappointed with that,” Swaney was quoted as saying on Reuters after the race. “But I worked really hard for several years to achieve this. I have been focusing on my Olympic experience but also on the halfpipe here and trying to go higher each time and getting more spins in.”

Swaney has long been interested in competing at the Olympics. She had originally planned to represent Venezuela, the country where her mother was born, in skeleton, but as her grandparents were Hungarian, Swaney was able to earn Hungarian citizenship and decided to swap the sled for skis.

Though only the top 24 skiers in the International Ski Federation (FIS) ranking get to qualify for the Olympics, Swaney, No. 34 in a sport that has 40 ranked athletes, was given a spot due to the country quota system.

By turning up at FIS Freestyle Ski World Cups and doing little more than skiing from one side of the halfpipe to the other without falling over, the 33 year-old successfully qualified for the Olympics.

As FIS rules require athletes to consistently finish in the top-30 at World Cup events, Swaney repeatedly competed in competitions with less than 30 competitors to begin with, ensuring her spot in the sparsely populated sport.

In the past two seasons, Swaney hasn’t finished a race outside of the top 30.

“I want to show others that freestyle skiing is possible and it is never too late to get into this sport, and to help others to dream and to progress the sport in Hungary,” Swaney was quoted as saying.

While the reception from skiing fans has been mixed, the competitors don’t seem to have a problem with Swaney’s unorthodox approach.

Gold medalist Cassie Sharpe of Canada said, “If you are going to put in the time and effort to be here, then you deserve to be here as much as I do.”

Silver medalist Marie Martinod of France also said, “I am a super open-minded person. This is why the Olympics are so special.”