Emblem is a basic lesson in Korean script

Emblem is a basic lesson in Korean script

The emblem for the 2018 PyeongChang Winter Olympic in Gangwon does more than represent the Olympic spirit of harmony within the global community. It can be used as a medium to learn some basics of Hangul, the Korean alphabet. 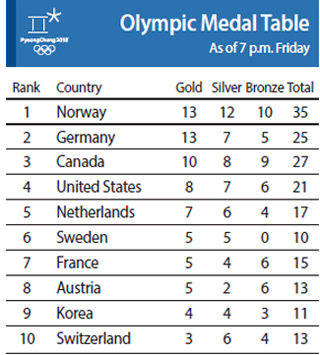 The element on the left, which looks like a pillared structure standing on the ground, symbolizes harmony and collaboration. The horizontal blue line on the top signifies the sky and the red line on the bottom the ground. The black and green vertical pillars represent humans working together to stay connected. The element signified a Winter Olympics in which people from around the world are connected through different kinds of sports. The design leaves a space between each line to signify openness -- plenty of room for different space to be combined.

It resembles the character in the Korean alphabet that sounds similar to “p” in English, the first letter in Pyeongchang County, where the winter Olympic games are being held.

The element on the right symbolizes the snow and ice one which most of the sports take place during the international event. It also represents athletes showing off their years of practice and training for the Olympic games with their arms and legs extended. The Korean character that is resembles is pronounced similar to “ch” in English - the start of the second syllable in Pyeongchang.

The emblem for the Paralympic games is comprised of two of the snow and ice elements used in the Olympic emblem. They are connected to represent how the disabled live harmoniously with the non-disabled, how athletes get along with spectators and how people in the global community cooperate together. This means that the Paralympic games help people go beyond race, regions, and physical disabilities to reach for hope and peace.