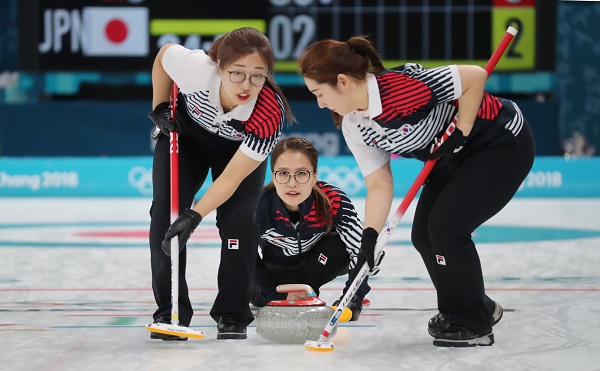 Kim Eun-jung, center, slides the stone while Kim Seon-yeong, left, and Kim Yeong-mi sweep during the semifinal game against Japan in Gangneung Curling Centre in Gangwon on Friday. [YONHAP]

The Korean women’s curling team frantically swept their way into the final on Friday, finally defeating Japan, the only team to beat them in the round robin stage, in a nail-biting semifinal at the Gangneung Curling Centre in Gangwon.

Korea got off to a great start in the first end, easily getting three in the house to take the lead. Japan followed with a strong second end, scoring two points. In the third end, Team Kim had the chance to bag a high score but were ultimately only able to score one.

The tempo picked up in the fifth end, with Korea managing an impressive triple takeout to clear Japan out the house. Japan rebutted with a double takeout of their own, only allowing Team Kim to take one point from the end.

The seventh end began with Korea leading 6-4. Korea had the hammer, the curling term for the last stone, and made the unexpected decision to empty the house at the end finished. If no team scores in an end then the team that had the hammer, and therefore the advantage, gets to keep it in the next end. By clearing the house Korea made sure they had the hammer in the eighth end, as well as the final tenth end.

Japan clawed back two points in the ninth end, leaving the score at a tense 7-6 as the game entered the final stages. Korea had the all-important hammer thanks to their strategy in the seventh end, ensuring they had the last shot of the game. A double takeout by Korea wasn’t enough to stop Japan having a stone on the bottom as Korea lined up their final stone. Although skip Kim Eun-jung was able to hit Japan’s stone, it remained closer to the center and tied the game 7-7, triggering an extra end.

Team Kim kept the hammer in the 11th end as Japan had scored in the tenth. After an incredibly close round with Japan edging slightly closer to the center, Kim Eun-jung managed to curl around Japan’s guard stone to knock the opposition out the house with just one shot each remaining. Japan managed to level the playing field with their final stone, but Team Kim refused to lose their cool, landing the final stone of the game on the edge of the button.

Team Kim emerged as an unlikely Olympic hero early in the Olympics, defeating world No. 1 Canada in the opening game. After losing to Japan in the second game Korea returned to the curling sheet with confidence, winning the following seven games to finish the round robin in first place.

Team Kim also turned heads for their skill with a curling stone. The Korean squad pulled off some remarkable moves to comfortably beat the five top curling nations in the world — Canada, the United States, Sweden, the United Kingdom and the Olympic Athletes from Russia.

Team Kim will return to Gangneung Curling Centre at 9:05 a.m. on Sunday to face Sweden in the final. When the two teams met in the round robin Korea won 7-6.