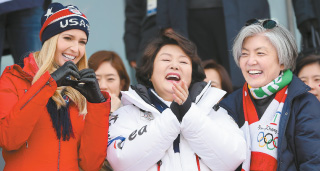 One of the foods for thought on the table as Ivanka Trump dined with President Moon Jae-in at the Blue House in central Seoul on Friday was working mothers.

“Senior adviser Trump talked about her experience in raising children, saying she is raising three kids and that it’s not easy being a working mom,” said a senior official in the Blue House.

The official said that other women at the table also quickly took up the topic, including Sarah Huckabee Sanders, the White House press secretary, who mentioned that she is also a mother to three children. “Korea’s Foreign Minister Kang Kyung-wha also said the issue is a relevant one at Korea’s Foreign Ministry,” the official said. “She said that female diplomats stationed abroad have to take care of their children and still carry out their job in representing Korea as a diplomat.”

The official said that Kang also mentioned some difficulties in procuring appropriate visas for spouses of Korean diplomats stationed in the United States.

“She said sometimes the spouses of the diplomats can’t get other visas than the tourist visa, which means they have to return to Korea in three months,” the official said.

Trump, the daughter of U.S. President Donald Trump and also his senior adviser, has been leading an American delegation on a trip to South Korea for the closing ceremony of the PyeongChang Winter Olympic Games in Gangwon on Sunday.

Back home, she has been pushing for a paid parental leave plan for months. She is also the author of “Women Who Work: Rewriting the Rules for Success,” which was published in May. It has received both acclaim and criticism.

The New Yorker wrote in November, “What can a woman born with a silver spoon in her mouth teach people who use plastic forks to eat salads at their desks?”

Other topics for discussion during the dinner included K-pop.

“Trump told Moon that her children enjoy dance parties every day after they’ve gotten to know about K-pop,” said the official. “Moon mentioned Michael Jackson and how he had lots of fans in Korea and that Jackson probably had an influence on the creation of K-pop.”

During Moon and Trump’s brief opening remarks in front of the press before they started the dinner, Trump thanked Moon and the first lady for their hospitality during her stay in Korea.

While Moon promoted the importance of holding talks with North Korea, Trump made it clear that her father’s administration will toughen sanctions on the Kim Jong-un regime.

“I thank you for hosting us all here tonight as we reaffirm our bonds of friendship, of cooperation, of partnership,” she said, “and reaffirm our commitment to our maximum pressure campaign to ensure that the Korean Peninsula is denuclearized.”