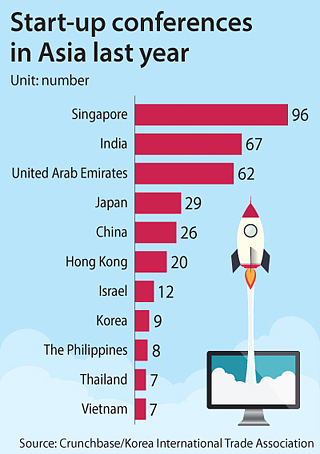 Korea is behind on hosting start-up conferences, and that is hurting its own success in nurturing innovation, a report said.

Conferences like TechCrunch, Web Summit and Slush are important for start-ups to find potential investors, and not only for start-ups in the so-called seed stage. For start-ups that are in need of multiple investments to scale up growth, expanding networks and finding mentors, conferences can be crucial for success.

The number of start-up conferences held worldwide expanded from 182 in 2013 to 3,730 last year. Korea’s tiny portion reflects the weak networks existing between Korean start-ups and foreign investors and other types of partners.

“Korea’s start-up scene is still young so it would be hard to attract global investors and entrepreneurs from the start,” said KITA Researcher Kim Keon-woo, who led the research and wrote the paper.

The government’s start-up-related bureaucracy should encourage local private companies to hold such events, although the support should be indirect so that private entities can maintain their autonomy.

In Korea, there are several accelerators and start-up support centers that hold regular sessions among experienced start-up mentors and young companies but none have yet attracted foreign investors and entrepreneurs. There was an effort by the Ministry of Science and insiders in the start-up industry called beGLobal held in 2014. But the event halted the following year due to low popularity.

“The government’s indirect support for such projects would be helpful , but a more fundamental question would be, ‘Who will be the leader in organizing such an enormous event?’” said Tae Yoon-jeong, CEO of MeetTheSun, a PR agency for a large number of Korean start-ups. “There’s no start-up in Korea big enough to do this and it doesn’t seem right for government offices to lead this either.”

Tae also said several government offices and private companies fail to maintain networks among event participants after an event is held, which requires many responsibilities.