Chung Hyeon gets back on the court

Chung Hyeon gets back on the court 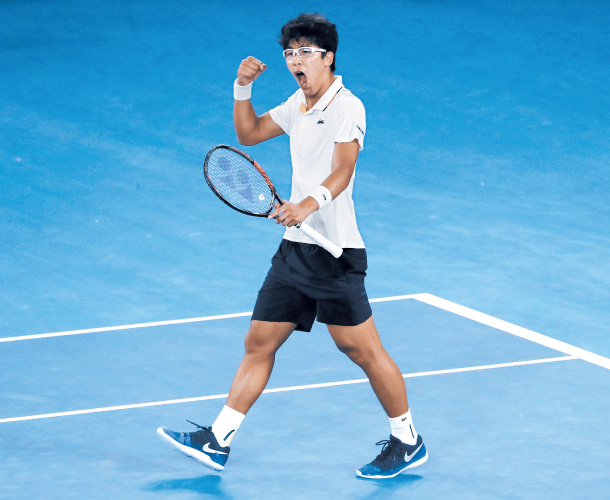 Chung Hyeon celebrates at the 2018 Australian Open after scoring a point against Novak Djokovic of Serbia during the fourth-round match on Jan. 22. [AP]

When Korean tennis star Chung Hyeon stepped onto the court for his first match at the Australian Open in January, not many thought the 58th-ranked player in the world would make it to the semifinal and charge up 29 spots to become No. 29.

He became the first Korean tennis player to make it that far at a Grand Slam Tournament.

Chung is now back on the court and made it to the quarterfinals of the ATP World Tour 500 series at the Mexican Open in Acapulco on Thursday.

The Korean star had an easy match in the round of 16, defeating 123rd-ranked Ernesto Escobedo of the United States 2-0, 6-3 in the first set and 6-1 in the second set.

Breaking into the quarterfinals, “The Professor,” as he is commonly known in Korea, is guaranteed $44,420 in prize money and 90 points toward his ranking.

But Chung wasn’t so lucky in men’s doubles.

The Korean tennis player teamed up with Canada’s Denis Shapovalov, ranked 45th, but lost to Britain’s Jamie Murray and Brazil’s Bruno Soares on Thursday 2-0, 7-6 in the first set and 6-2 in the second.

Though the series is not as prestigious as the Grand Slam, Chung is expected to move up in world ranking to No. 27 by next week. If so, he will once again make history, becoming the first Korean tennis player to place that high in the world.

Chung gained wide popularity in January when he caught the tennis world by surprise after defeating former No. 1 Novak Djokovic of Serbia 3-0 in the round of 16 at the 2018 Australia Open.

Though there were high hopes that he would reach the final, Chung was forced to retire in the second set of his semifinal game against world No. 2 Roger Federer of Switzerland because of a foot injury.

His medical emergency also cost him his place at the New York Open as he had to pull out of the event in early February.

But Chung returned to the tennis scene last week at the Delray Beach Open in Florida, where he also reached the quarterfinals but failed to progress further after losing 2-1 to Frances Taifoe of the United States.

In Mexico, Chung will face eighth-ranked Kevin Anderson of South Africa in the quarterfinals today.

Chung started playing tennis at age 6 to improve his eyesight. His mother reportedly took him to the hospital because he was always frowning and found out he had astigmatism. An optician recommended that Chung focus on the color green; his family felt tennis was the best option.

It turned out to be the right choice. Chung was the youngest player to reach the Australian Open semifinals since Marin Cilic in 2010 and the lowest-ranked player to get there since Marat Safin, ranked 86th, in 2004.